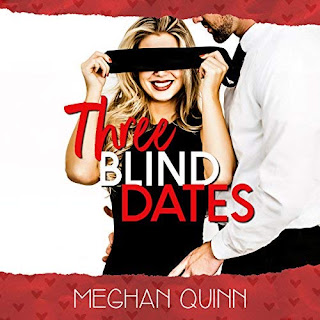 When it comes to romantic comedies, Meghan Quinn is an author that ranks high in my book. She can write slapstick type of stories as well as she does more lighthearted and witty fare, but always--ALWAYS!--with that swoony romance that she's known for. I read and adored her Dating by Numbers series, so when the opportunity to listen to the first full-length audiobook came along, it was a no-brainer. I wanted to see how this story of one woman set up on blind dates with three very different men would pan out on audio, and I was NOT disappointed!

All Noely Clark wanted was to have the best possible audition tape that she can make for a dating show, so why not take advantage of the fact that she's a morning show host and use her studio's facilities, right? Well, not asking permission from the powers that be could spoil her plans...that is, until they come up with plans of their own. Having her go on three blind dates was a win-win--she'd get her dating grove on AND have new content for a new segment. Easy-peasy. But that was before she connected with all three guys and realizes she can only choose one...

This audiobook had a couple of great combos: Meghan Quinn's fabulously funny writing teamed up with Ava Erickson's and Aiden Snow's spot-on narration; plus the coming together of Erickson's and Snow's voices to create a sense of cohesiveness. I'm not going to say who Noely ultimately chooses--you're going to have to listen to the audiobook to find out, BUT all three guys in the story do end up with their happy endings. Also, all three full-length audiobooks AND the novella-length one are out, so go listen already, peeps! Three Blind Dates easily gets five stars. ♥