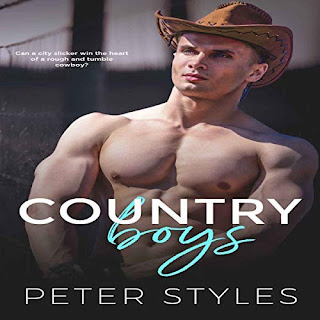 Country Boys was my introduction to Peter Styles as an author and Barney Parkwynne as a narrator, and it's basically the story of two high school acquaintances--Kyle Robbins and Allen Hale, Jr.--who lost touch with one another over the years and had no clue that the crush they harbored was quite mutual. When Kyle's dreams of having a successful career as a journalist fall to the wayside, he finds himself returning to his hometown thanks to an unexpected job offer from AJ. Working on a ranch isn't Kyle's dream, but he's willing to put in the work for as long as it takes him to save up enough to do something else with his life. But he's struggling back in his hometown, both with ranch work and his feelings for AJ. While Kyle's sexuality isn't a secret, no one quite knows AJ is gay, and as if things aren't complicated enough, it looks like Kyle wishes he were anywhere but at this ranch which AJ loved.

I have such mixed feelings about this audiobook, and a lot of it had to do with Kyle's treatment of AJ. Here was this man who had offered him a way to earn an honest living, and yet Kyle seemed ungrateful most of the time. Add to that how he did the whole back and forth thing, almost like he was playing with AJ's feelings. It was okay the first couple of times, but it got to the point where it was such a constant thing that it became tiresome. The saving grace was times three and came in the forms of AJ, his dad, and Kyle's sister. I mean, sure, Kyle does redeem himself much later on, but by then, I found myself wishing AJ had turned his affections towards someone else to spare himself the constant heartache and wondering if he and his family ranch was enough for someone like Kyle who preferred city life and went to such lengths in order to truly distance himself, literally and figuratively, from their small town. As a side note, this is NOT a "First Time Gay Virgin" romance. Neither Kyle nor AJ were virgins nor was this their first time to be involved with someone of the same sex. As far as the narrator is concerned, I appreciated his efforts in providing distinct enough voices for these characters. I'm giving Country Boys three stars. ♥