Review: "A Question of Counsel" by Archer Kay Leah (The Republic #1) 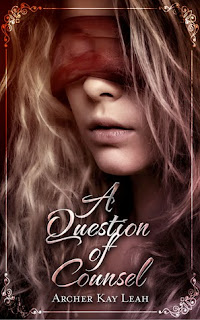 Aeley Dahe is the Tract Steward of Kattal, a position she won over her brother Allon, who then went on to attack one of the villages in a supposed show of force. Defeated and arrested, Aeley is now called by the High Council to bear witness to her brother's crimes. While there, she is informed by a Councilman that her late father arranged a marriage for her to a member of the Grand Family of Derossa. Aeley is less than thrilled, not wanting to be forced into a marriage of convenience and wishing that she could choose Lira instead, sister to Aeley's Derossa suitors and her new scribe to whom she is drawn.

But Aeley's attention isn't solely on finding a spouse, not with seemingly random acts of violence occurring in Kattal. She must find out what's triggering the attacks and who could possibly be behind them. Her suspicions immediately land on her brother Allon, but could he really have masterminded them while serving his punishment? The only thing that brings her joy and peace is her deepening relationship with Lira, but when Aeley herself falls victim to those wreaking havoc in Kattal, will doubts begin to creep up and make her question if what she and Lira share is real or if it was all part of a rouse?

A Question of Counsel is a fantasy romance novella by author Archer Kay Leah in The Republic series and is about Aeley and how she manages to create her own legacy as the leader of Kattal instead of merely living in the shadow left behind by her father, who was the leader prior to his death. Aeley knows that there are those who question her capabilities, but with the faith and support of her best friend and Head Guard Mayr and a handful of loyal supporters, she strives to prove her naysayers wrong. When Aeley notices Lira, her new scribe, there's something about her that gives Aeley pause and makes her want to know Lira on a more personal level. Learning, however, that her late father wanted her to marry a member of the Derossa family has Aeley trying to balance the wants of her father and her people and the needs that she, as a woman, also carries. Lira being a Derossa herself may give Aeley pause but Lira's brothers point out that Lira is nothing more than a disgrace. Adding to Aeley's worries are acts of violence against the people of Kattal and if she isn't able to find out if these are mere random events or something sinister and planned, she may lose her integrity as the Tract Steward or far worse.

This was a well-written and creatively original novella set in a world that may be different but one that can be easily understood by readers. The fact that the lead characters are two strong women makes this even more of a worthwhile read, neither of them needing to be saved or seeking validation from one another. There's also a bit of mystery that goes on and though I did figure out who was behind the attacks in Kattal, I was surprised by what happened after the reveal. I'll admit that, just like Aeley, there was a moment of doubt and the author getting me to question the motives of a character I like deserves bonus points. I liked the humor mixed in with the drama because it allowed the story to not be as heavy as you would expect with a subject matter as serious as the one here. As for the supporting cast of characters, Mayr was my absolute favorite, with my initial impression of him being this overly serious Head Guard being blown out of the water when his wicked but understated sense of humor and protective and brotherly nature toward Aeley coming to light. If you're looking for a fairly quick but substantial read, I recommend you check out A Question of Counsel. It gets 4.5 stars! ♥

Purchase A Question of Counsel on Amazon | B&N | Kobo.