Review: "Ghost of a Promise" by Kelly Moran (Phantoms #1) 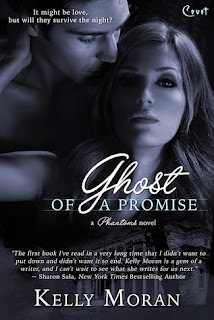 Upon the passing of her beloved great aunt, Ava Trumble finds out that the mansion that's been bequeathed to her has one very interesting stipulation: she needs to find out what happened to a young woman named Sarah Kerrick who was in love with Peter Trumble, one of Ava's forefathers, and must provide evidence of her findings. Ava then contacts Phantoms, a popular television show that investigates stories and reports of paranormal activity in different locations. She hopes they'll be able to help her learn more about Sarah Kerrick's mysterious disappearance and whoever may have behind whatever befell her.

In all his years with Phantoms, lead investigator Jackson Granger has never been as affected by someone as he is by Ava Trumble. There's an instant and inexplicable connection that he feels toward her, almost as if he's known her all his life. Ava may pretend she isn't affected by Jackson's good looks and British accent, but she is and when she learns that he's actually a nice guy beneath the playboy image, the more difficult he is to resist. However, they both know that at the end of the investigation, Jackson and his crew will have to leave, but it appears that the ghosts that inhabit the Trumble mansion have plans of their own for them.

Ghost of a Promise is the first novel in the Phantoms paranormal romance series by author Kelly Moran and as a fan of most things ghost-related (because while I love reading books and articles and watching television shows and movies about them, I seriously do not ever wish to encounter a ghost in real life), I love when an author can add their own creative twist to it. This wasn't a simple story of two lost souls trying to find each other in the afterlife. Lead characters Ava Trumble and Jackson Granger play very vital roles to what happens to the ghosts of Peter Trumble and Sarah Kerrick, their respective ancestors. You do end up wondering if the actual connection between the two of them is simply there because Peter and Sarah were erstwhile lovers whose own love affair was cut short and if there was some sort of spell cast upon both of them or if the feelings they had were borne out of a mutual desire and need to be together.

Even though there was a strong and immediate bond between them, I was happy that Ava and Jackson didn't jump into anything physical with one another right away. I also liked the supporting cast of characters and readers are given just enough to hook them and have them interested in learning what their stories are in future installments. There's a good mix of suspense, mystery, and romance in this well-written tale of love lost and love found. Phantoms is definitely a series that I now have on my radar and with me finishing the second book soon after reading this first one, it would be safe to say that I can't wait to read more about this team of paranormal investigators. There was no putting this book down once I had started it and I'm happily adding it to my list of 2015 favorites. I'm highly recommending Ghost of a Promise to my fellow paranormal romance lovers and am giving this fab book a well-deserved five stars. ♥

Purchase Ghost of a Promise on Amazon | B&N | Kobo.