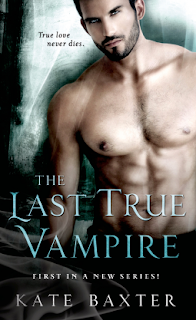 Mikhail Aristov is the last of his race, the last of the Originals. He may be king of the vampires but without the ability to turn dhampirs into true vampires, his race ends with him. He remains soulless and untethered, merely existing after having survived the near annihilation by the Sortiari and their berserkers...that is, until he encounters a woman who calls to him like no other woman ever has in his centuries on earth. With her, he suddenly feels alive, but how could this human make he feel something that was never thought possible between the likes of him and her? Before he can delve further, she disappears and Mikhail knows one thing for certain: he must find this woman--his mate--and claim her.

Claire Thompson is, for all intents and purposes, a hustler. She's tried to keep to the straight and narrow path, but desperate times call for desperate measures and she needs a big score in order to make rent. When she hones in on an obviously wealthy man in an exclusive club, she realizes too late that the hustler has become the mark and she experiences something she's never experienced with any other man before. Even days after, Claire hasn't forgotten the man named Michael, but when he suddenly appears out of nowhere, saving her from a priest who has assaulted her, she begins to learn that there is much more to him than she ever thought possible, but is she ready to give him what he craves: an eternity by his side?

The Last True Vampire is the first novel in a new series by author Kate Baxter and is a paranormal romance about Mikhail Aristov, the last surviving true vampire, and Claire Thompson, the human who turns out to be his mate. When they meet, Mikhail realizes that his soul, the one he lost when he became a vampire, is tethered to that of Claire's, binding them together, but telling Claire his true nature and that she belongs to him doesn't go over as well as he'd hoped. There's obviously a connection between the two of them but everything's going at a pace that's faster than Claire can keep up. She makes a choice that she later ends up regretting but now there are more obstacles that she and Mikhail must face, especially if she is to fulfill her destiny, a destiny that not even Mikhail could have ever predicted but he needs to get over his own fears brought about by the Collective, combined memories, both good and bad, that belong to him and the countless vampires before him. And then, of course, there is the Sortiari who want to finish what they started many years ago, and this time, they intend to get to Mikhail through none other than Claire.

This was a fine start to the series, introducing readers to a cast of characters that makes you curious to learn more about them, especially Ronan, who is given just enough of a side story to get you interested in the second book which shines the spotlight on him, and a story arc involving the vampires and the Sortiari that I hope will continue to be explored in the sequels. Mikhail and Claire's love story had that combination of romance, steam, and suspense and paced just right, never too slow to get you bored and never too fast to have you feeling like you missed out on a few things. Claire was the kind of heroine that you want to root for--independent, strong-willed, and courageous--and when she and Mikhail were together, they were this combustible pairing that looked like they were ready to conquer the world. On the other hand, you have Mikhail who was this mix of alpha male vampire king and protective and loving mate to Claire. I really liked these two together and I look forward to still seeing them, even if only as supporting characters for the rest of the series. The Last True Vampire by Kate Baxter gets 4.5 stars! ♥