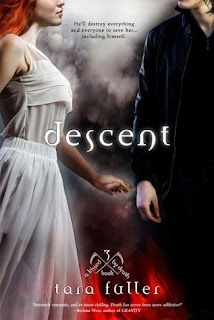 Note: This ARC was Entangled Publishing in exchange for an honest review.

Easton and Gwen are as different as can be, and it isn't just limited to his being a reaper for Hell and her being an angel in Heaven. He's the dark to her light and she's brings peace to the chaos that still lives within him. Even though everyone around them says they should stay as far away from one another as they should, Gwen sees something in Easton that makes her want to reach out and help him, to bring him the joy that she brings everyone else she comes in contact with. On the other hand, Easton believes he deserves to be living the kind of afterlife he has because of the things he did while alive. He doesn't deserve someone like Gwen...But Gwen has always followed her heart and it's leading her to Easton.

When Gwen's father, Balthazar, the ruler of all reapers, decides that maybe it's time for his daughter to see what darkness truly means and, upon Gwen's insistence, assigns Easton as her guide. But the girl Easton calls "Red" has other plans--to save the human mistakenly sent to Hell by one of the reapers. There's no talking her out of it and Easton knows he must do everything necessary to make sure she is unharmed. As they spend time together, Gwen begins to realize just how deeply broken Easton is but she still believes that she can save him. The longer they stay in Hell, the more in danger both Easton and Gwen become, making their rescue a race against time to save not just the human but to save one another.

Descent is the third and latest release in the Kissed by Death series by Tara Fuller and fans of the series finally get their chance to learn more about Easton, the reaper of souls destine for Hell who has captured our imagination and attention from book one onward. He was there when Finn needed help with Emma in book one and when Anaya needed help with Cash in book two, and while the guy may have been one of Hell's reapers, he certainly had a good heart, especially when it came to those he cared about. Learning his back story helped to shine a light on why he was a reaper for Hell but that his actions while still alive were motivated by painful and traumatizing events. I liked that he was paired up with someone like Gwen, a totally new character, someone who was so different from him but was able to see the goodness that still lay beneath the black clothing and darkness lingering around him whenever he delivers a soul to Hell.

This book lives up to the expectations and standards set by its predecessors, Inbetween and Blurred, but has an original love story, with an angel and a reaper for Hell falling for each other. It's also a good story about redemption and how we sometimes do certain things in the name of justice or revenge for those we love. While Easton and Gwen may seem like the poster children for what they supposedly represent, i.e. Hell and Heaven, they are multi-layered, proving that a bad boy doesn't necessarily mean that he isn't capable of being good and that a good girl may want to experience what's considered bad in order to have a better informed understanding of the world around her. An added bonus was Easton's two touching moments with Finn, his best friend and former fellow reaper. I'm not sure if Descent is the final book in the series, because I am curious about Scout, but if it is, it certainly ended on a high note! Five stars! ♥