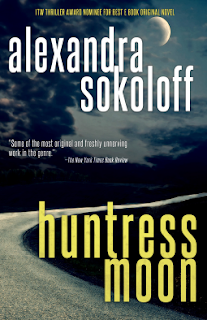 Note: This ebook was provided by Thomas & Mercer via NetGalley in exchange for an honest review.

Roarke stood silent, feeling a roller coaster of adrenaline. He didn't know what it meant but it sure as hell didn't sound good.

Snyder looked pensive. "The native Americans call the October full moon Hunter's Moon." His mouth quirked in an expression that was not quite a smile. "Perhaps the blue moon is the Huntress Moon."

Roarke had an uneasy feeling that he was right.

FBI Special Agent Matthew Roarke may be the head of the Criminal Organizations division of the Federal Bureau of Investigation but he finds himself with no other choice but to return to his investigative roots as a member of the Behavioral Analysis Unit or BAU when a he's confronted by an unknown subject or unsub who is as rare as they come--a female serial killer. With the help of his team and his mentor, Roarke tries to profile the individual killing men with a straight razor and the woman he has in his sights is like none other he's ever come across. When he finds out who his unsub is, Roarke is suddenly unsure but knows he needs to find her and put a stop to her killings, no matter how much her victims deserved to be ended.

I'm trying to figure out how to write this review without giving too much away. Heck, even my summary is shorter than usual because I didn't want to spoil it for anyone who hasn't read Huntress Moon yet. This is the first book in the Huntress/FBI series by Alexandra Sokoloff and I read all three books in a span of two days, including the hours I actually ate, slept, and lived the rest of my life away from my tablet. From the first page 'til the last, I was on tenterhooks, feeling the anxiety that Matthew Roarke shadowed his every step the deeper he immersed himself in the case of his huntress. His fascination for her is matched only by the fascination he had for a cold case, the very same case that captured his attention as a nine-year-old boy and set him on the path of law enforcement, though, in hindsight, I believe he was even more fascinated with the huntress than the unsolved case of the Reaper.

The story is told from a third person point of view but you're able to see what both Roarke and his huntress are doing and the moments that the closer he gets to laying his eyes on her, the more the anticipation builds. Once he finds out about the huntress's history, Roarke can't help but empathize with her and her quest, something that I, as a reader, easily understood because I felt the same way while reading the book. There's an undeniable connection between Roarke and his serial killer--the hunter and the hunted--and it creates this bond that makes it possible for them to have some semblance of protectiveness for one another. Their missions in life are, after all, similar, even though they go about accomplishing them in completely opposite ways. I so did not want him to catch her but I did want their paths to cross, just to satisfy my own strange curiosity.

I don't think I can even remember the last time I read a non-romance novel that I loved as much as I did Huntress Moon, and this was only the beginning of my now obsession with the Huntress/FBI series. There's no way I could read one book and not read the other two, especially because the story doesn't end here or even in the sequel. This truly is a suspense thriller in every way books in the genre should be but on a level that only past masters of the craft have been able to do. I'm very much impressed with Alexandra Sokoloff's writing--the way she's able to make you feel as if you truly are seeing everything through Roarke's and the huntress's eyes and experiencing every thrill and chill with them. I know this book isn't new and I'm pretty sure there have been quite a number of people who have already had the pleasure of reading it, possibly along with the two other books in the series, but I am still highly recommending Huntress Moon. It gets five-plus stars! ♥