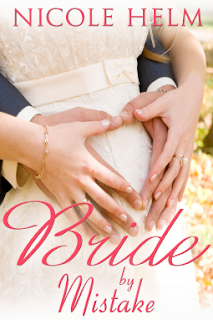 At the age of ten, Kaitlin Shuller had her sights set on Carter MacArthur and decided she was going to marry him one day. Today, Carter's about to get married...to Kaitlin's sister Sierra. Kaitlin still doesn't know where her plans went wrong--she was always the good girl, the one who did everything that was expected of her and Sierra was the opposite, forever the rebel. How could someone as perfect as Carter fall in love with someone as imperfect as Sierra? Kaitlin knows she can't stop the wedding, so she decides to suck it up and suffer through it. And then she decides it's time to throw caution to the wind with none other than the one person who happens to be the walking epitome of what a bad boy is, Beckett Larson.

As much as he tries, Beckett Larson can't seem to escape the "bad boy" label that's been put upon him. Heck, it's even gotten as bad as being called a "bad seed", but he's worked hard to make a name for himself and to build the business he shares with his best friend Luke Shuller. Unfortunately, money appears to have gone missing and Luke decides to pin the sole blame on Beckett, which hurts Beckett because he though Luke was the one person who was able to look beyond the negative reputation shadowing him. He knows that getting too close to Kaitlin is a bad idea, especially with things going south with her brother, but he's always paid close attention to her and maybe this good girl is exactly what this bad boy needs.

Bride by Mistake is the third book in the multi-authored Montana Born Brides series and is about a bad boy who falls for a good girl and find themselves with the additional complication after one night together. I really liked Beckett Larson and could see that there was so much more to him than the bad boy image that the town kept saddling him with. Kaitlin Shuller could see that he wasn't the bad boy he may have once been, but even though she's attracted to him, she's wary about thinking about what they shared as anything more than a one-night stand.  Even when the consequences of that night become something neither can avoid, she still isn't ready to think of wedding bells, white picket fences, or happily ever afters.

The story itself was interesting, though the whole Luke angle wasn't explored as thoroughly as I think it should have. Even if Luke gets his own story in the future, this was about Beckett and Kaitlin and Luke's treatment of Beckett was deplorable, considering they were best friends and business partners. I also didn't feel as much chemistry as I would have wanted between Beckett and Kaitlin, to the point that I felt Beckett had deeper feelings for her than she did for him. Without a doubt, Beckett was my favorite thing about the book and he deserved better than Kaitlin's lukewarm feelings and Luke's distrust. Bride by Mistake was pretty good but I must say that it did leave me a bit wanting. It gets 3.5 out of five stars. ♥

Pre-order Bride by Mistake on Amazon.