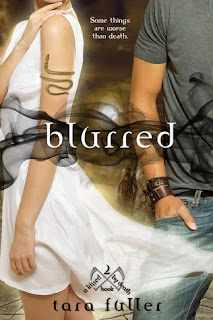 Cash should be dead. He knows it in his heart. There was no escaping the fire that consumed his best friend Emma's home, but somehow, he and Emma are still alive. though he feels as if he's barely even doing that. He's haunted by dark shadows that appear to be lying in wait for him. He also feels there's someone else watching over him, a different kind of entity that brings light and peace his way. Could she have had something to do with why he's still alive and is she what Emma's new boyfriend Finn used to be--a reaper? Now, he has feelings for her that he's never had for anyone else...except, maybe, one certain person.

Anaya was simply doing what she was told. Balthazar, the ruler of all reapers, gave her a directive and, in exchange, she would finally get what she's been working toward for centuries--to cross over and be with her loved ones, especially the only man she's ever loved and was engaged to prior to his death, Tarik. Even though what Balthazar was asking for appeared to be out of the norm, she agreed, allowing her own needs to overtake her. But when she sees how Cash is suffering and realizing that he's straddling the line between life and death, Anaya knows she must help this boy who has captivated her before it's too late.

Blurred is the second book in the Tara Fuller-penned Kissed by Death series and it picks up soon after the events in the first book, Inbetween. The focus is now centered on Cash, a teenage boy who survived a fire while trying to save his best friend Emma and Emma's mom, and Anaya, a reaper for Heaven who was tasked to return Cash's soul to his body and is now dealing with the repercussions of her actions. Cash has also alienated himself from Emma, the one person who accepted him wholeheartedly and was always there, ready to protect him and fix things whenever they would go wrong for him. The reasons behind Cash remaining distant from his best friend are not limited to what happened during the fire and the fact that she kept Finn's existence a secret from him until after they nearly died.

There were a few surprising twists in the story, making it even more of an exciting read because I didn't see them coming. Having the same supporting cast of characters also gives the book specifically, and the series in general, a feeling of familiarity, which helps in getting me invested in the characters who matter. Cash and Anaya stood out in the first book, along with Easton, so wanting to know their story and how it ends gives you something to look forward to. I remember Cash acting selfishly in one instance in the first book while Anaya acted on her own selfish motives when agreeing to do what Balthazar wanted, making them different from Emma and Finn, who seemed rather ideal (though not perfect in the least), and adding a new dimension to their relationship and their love story.

While Cash and Anaya's story is similar to that of Finn and Emma's in terms of one of them being alive and the other being dead and that those who are alive are still in that state because of the interference or involvement of their reapers, there are enough differences that distinguish one love story from the other. Second books in a series are always in a precarious position especially if the first book was a favorite among readers. They can keep the momentum going, raise the bar even higher, or drop the ball altogether. I'm happy to say that Blurred was a sequel that kept the momentum that the first book started and that I enjoyed it as much as I did its predecessor. The Kissed by Death series is fast becoming a favorite in the YA paranormal romance genre and I'm giving Blurred five out of five stars. ♥