Review: Out of the Blue by Lila Rose 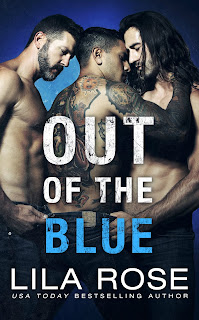 Out of the Blue is the new M/M/M romance (with a hint of action and suspense, too) release from bestselling author Lila Rose, and while it is a standalone, it is connected to the Rose's Hawks MC: Ballarat Chapter and Hawks MC: Caroline Springs Chapter series given that two of the three main characters are honorary members of the club and many of the characters from those two series do make appearances in this book. I haven't read all the books in either of those two series, but I was still able to fully enjoy this standalone, so I think it's safe to say that you can jump right in and read this one without needing to peruse all the books--and there are several--that came before (although they are on my to-be-read list and with all the characters that were part of this book, my curiosity is definitely getting the better of me and making me want to push these two series higher on that TBR list of mine).

Forty-year-old police detective Lan Davis has never forgotten the one that get away--although it was more of him pushing Easton Ravel away and not chasing after him ten years ago. When the now-twenty-eight-year-old paramedic rescues him after he's brutally attacked, Lan wonders if this could be the second chance he's wished for with East. To complicate matters, Lan's thirty-six-year-old partner looks upon East with suspicion and wariness, but then Detective Parker Wilding isn't really known for being warm or welcoming. Lan and East may have history but they also suffered through broken hearts because of it; Park's own reaction to East and recognition of Lan in a whole new light leave him curious and confused. Two of them is complicated enough; three could be challenging. Are Lan, Easton, and Parker prepared to meet the challenge of being in an unconventional relationship together?

I tend to be really picky when a book involves a threesome or throuple. I need to be able to believe that this is more than just sex for all three, and while many authors try to get that idea across, not all of them succeed--at least as far as I'm concerned. In the case of Lan, Easton, and Parker, however, I was more than pleasantly surprised because while I was on the fence during the first half of the book, these three had me invested in their relationship by the second half. I appreciated that I wasn't being forced into believing that it was love for the three of them from the beginning, and I liked seeing them forge not just a sexual connection but also one  based on friendship, trust, and respect. The added element of suspense was like a nice dollop of extra on an already great read, and while I know that I haven't read a whole lot of Lila Rose's books, Out of the Blue is my favorite one so far. 4.5 stars! ♥

Purchase Out of the Blue on Amazon | Apple Books | B&N | Kobo.