Review: One Step Back by Edie Danford 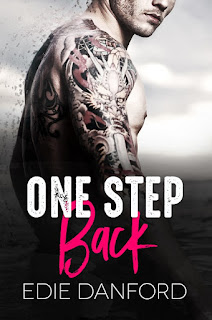 There was a point in time where the plethora of books about stepsiblings falling for one another had me running for the hills because it became too much of a good thing and I had reached my saturation level. Luckily, that was a couple or so years ago, so Edie Danford's latest release was more of a welcome change of pace from the books that I'd been reading as of late. For the record, this wasn't actually a full-blown stepbrother romance since the two main characters' respective parents were engaged to be married when the whole taboo-like relationship started.

One Step Back is the second chance love story between Asher Smith and Joseph Beneventi, who met when they were both fifteen and their parents were dating. When they were nineteen, they were in love but had no choice but to keep their relationship secret--until it was suddenly discovered by their parents, leading them to go their separate ways. Eleven years later, Joe and Ash have no idea that they're about to have an unexpected reunion, all thanks to working for the same public relations firm. Working together is a bad idea, what with all their unresolved issues and memories of two very broken hearts. Getting back together, though? That could be even worse...or not.

I've enjoyed a number of the author's books in the past, and this newest standalone of hers was a good read as well. I liked that there was a lot of awkwardness between Asher and Joe because it's not as if their relationship ended on the best of terms. There are flashbacks in the story that help give a better idea of how their love story began--and how it ended--and I must admit that how I saw Asher and Joe at the beginning of the book did shift once I saw how everything played out when they were teenagers. While there were moments that I wanted to shake Asher and make him see sense, Joe was someone I wish I could hug because the guy deserved to be the one who was chosen and fought for by more than just his mother. Overall, One Step Back satisfied and gets four stars. ♥

Purchase One Step Back on Amazon.