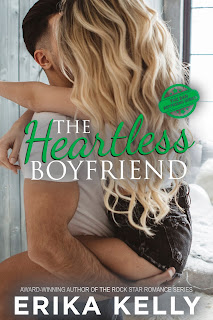 Sorry, Fin, but Will just knocked you out of the top spot as far as Erika Kelly book boyfriends is concerned. There's no denying that there's something about the four Bowie brothers that's both intriguing and enticing, and while I'm still going to have to get to know Gray and Brodie better when their respective books come out, for now, it's twenty-eight-year-old freestyle skier Will Bowie that has my heart all a-flutter. This second Bad Boyfriend novel may be entitled The Heartless Boyfriend but if anything, Will's heart has space for everyone, especially the little sister that none of them knew about until two-year-old Ruby was brought to their front doorstep by her nanny, and maybe even the twenty-six-year-old beautiful chef named Delilah Lua from New York City heads to Will's hometown of Calamity, Wyoming in order to find a new direction for her career after her best laid plans go awry. When Will is suddenly suspended by the league after baseless accusations are slung at him by a jealous rival, both he and Delilah are in their respective limbos, but will falling in love make things even more complicated for them?

I. LOVED. WILL! The man seriously had me swooning, and a lot of that had to do with how he was with little Ruby. Goodness, but the guy's unconditional love for his sister knew no bounds. For all intents and purposes, he was more father than brother to her, and her being there was like having a piece of his late father back with him and his brothers. Now, that doesn't mean that the three other Bowies weren't reliable or couldn't care less about Ruby. Quite the opposite, but it was Will and Ruby who shared a very special bond, and a man who loves a child as much as Will simply earns double bonus points from me. The guy's sweet and sexy as well, and he gets to explore the more romantic side of him when Delilah becomes a part of his and Ruby's lives. I really liked Delilah, and my heart did break for her after the way her siblings handled the whole thing during her twenty-sixth birthday. Talk about lousy timing. Both Will and Delilah thought that who they were and what their legacies were relied solely on their careers, but it was meeting each other and a little girl named Ruby who made them realize that there were more important things that mattered in one's life, namely, love and family. The Heartless Boyfriend easily gets five stars. ♥