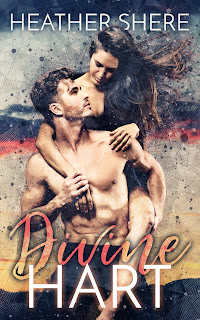 Heather Shere's second release--and my second read from her--is a second chance romance entitled Divine Hart, and it's the story of Skye Divine and Preston Hart, who were young and in love but were forced apart due to circumstances beyond their control. Five years of searching for Skye leads Preston to find her on the streets, but even as he rescues her from the sort of life she's now forced to live, Preston knows all too well that he's going to have to work hard to win back her trust--and harder still to win back her heart. After all, he upped and left without a word of warning, but he also believed that when he came back a few months later, Skye would be there waiting for him. A lot has happened to both of them in the five years they've been apart, but what Preston doesn't know is that Skye has experienced far more horrors long before that. He may have failed to protect her before, but now, he's gearing up to make sure no one is ever going to hurt the one and only girl who's owned his heart for so long.

This book held promise, and as is the case with all books, I went into this one with what I consider relatively realistic hopes and expectations. While I did like that there was a believable amount of chemistry between the main characters, this book faltered as far as the story was concerned. Both Skye and Preston have secrets that they've kept from each other, although Skye's secrets are far darker and have been kept for far longer. Because of everything that Skye's been through, she's understandably wary and doesn't trust as easily, so there are many moments where she lashes out or pushes back only to suddenly comply with whatever it is that's being asked of her by Preston and her friends. I was rather disappointed that whatever it is that Skye and Preston went through in the past was simply told, so it didn't have the impact that comes from being played out instead. The romance was okay, the heat level lukewarm, and the suspense lacking oomph. All things considered, Divine Hart gets three stars. ♥