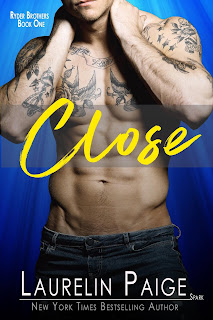 She's asked me to be her booty call, but I don't want that to be all there is between us.

I want to see her, for real.

And, as she's made quite clear, of everything I want to do with her, that's the most taboo thing of all.

With Laurelin Paige's great selection of reads, my favorite has always been her First and Last duet...but now, it has to share that top spot with the author's newest release! Together with fellow authors Kayti McGee and JD Hawkins, Paige is part of the Ryder Brothers trilogy, and her offering is what kicks off the new series. Close is a May-December romance between thirty-six-year-old film actress Natalia Lowen and twenty-three-year-old rock star Nick Ryder, who also happens to be the youngest among the Ryder brothers. If Natalia sounds like someone familiar, you may remember her from Paige's One More Time Hollywood romance which came out a few months ago. If you haven't read that book, no worries, since the two can be read independently of each other, but I did really enjoy it, so consider this a recommendation on my end for you to check it out before or after you read Close.

Natalia Lowen has spent years cultivating her image as America's Sweetheart. She's the good girl that rarely does wrong, and on the rare occasion--otherwise known as the Tanner James incident--that people believed she'd lost her way, she was able to fix her image and get back in the good graces of the public. Hooking up with a rock star thirteen years her junior wouldn't be the wisest thing for someone like her to do, but there are only so many times she can walk away from Nick Ryder without the feeling of regret getting to her. Fate seems to be telling her something and when Nick finally takes matters into his own hands, Nat gives in to the connection that's been simmering between them since they were together on the dance floor. She makes it clear that what they have is very temporary. This is all about giving her body what it needs, but will she be able to give her heart who it wants?

I have two words for Nick: le sigh. The guy's seriously one of the most unforgettable male main characters I've come across so far this year, and I've met A LOT. Yes, he's a rock star, and yes, he could have any woman he desires, but the lengths he went to in order to be with Nat were so damn swoon-worthy that I so wanted to shake Nat more than once so that she had a far better appreciation of his efforts and have a better understanding of how exactly Nick felt about her. I could empathize with Nat's concerns regarding the age difference and the oppressive glare of the spotlight that was very much on both her and Nick. These two didn't have an easy road to their happily-ever-after, but I loved that they had their respective sources of support pushing them forward--aka Nick's brother Jake and Nat's best friends Hadley and Rowan. I know Hadley gets her own story via JD Hawkins and Jake courtesy of Kayti McGee, but I hope Rowan has a shot at an HEA, too. I adored Close and easily gets five-plus stars. ♥