Review: The Boy I Grew Up With by Tijan 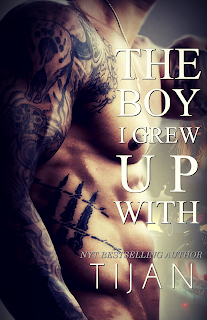 “If you want me to have a better life, I'd have to leave, and that's not me. I am Fallen Crest. I am Roussou. This place is who I am.” She looked up, our eyes meeting. “You are who I am.”

Am I the only one left who has yet to read Tijan's Fallen Crest series?! It's been a little over five years since I first discovered the author via Carter Reed, and while I've read a few of her standalones since then, I've missed out on all her series--not counting Crew since that just started this year and I've already read the series starter--including the second Carter Reed novel. It's sad, I know, but with the cameo appearances of her Fallen Crest characters--both from the original series and the spin-offs--I'm going to have to make time to familiarize myself with their stories because if Crew hadn't already made me curious enough, the author's latest release has me smacking my head for waiting THIS long to finally do something about my prior cluelessness. But I digress! On to the actual review we go.

The Boy I Grew Up With is a spin-off of Crew, the first book in the series by the same name, but it serves well as a standalone--although, trust me, your curiosity IS going to be piqued time and again throughout, but such is what happens when you come across intriguing characters. This novel, however, is all about Heather Jax and the boy who was once the bane of her existence and later became the love of her life--Channing Monroe. She's had his heart since the third grade, but the years have tested them time and again. Heather knows that she doesn't exactly hold the top spot in his list of priorities. His younger sister will always come first--as she should--but even his crew takes precedence over her. And maybe the time has now come for them to put up or to shut up--to make an honest-to-goodness go of a future together. But will doing so mean having to give up parts of themselves as well?

I was totally obsessed with this book the entire time I was reading it--without breaks!--AND for hours afterwards. There's always this sharp bite of humor in Tijan's books that I appreciate because it does add just that bit of lightness to what tend to be heavy material. Channing and Heather love one another but this is a case of love not being enough to actually get two people to fully commit to a life with one another and being able to put each other first. They live complicated lives, Channing more so than Heather, and there is A LOT that they need to deal with in this book--stuff I'm not going to get into because this isn't spoiler central, people--but allow me to say that that manner in which everything was resolved seriously had me wanting to do something I have NEVER done in all my years: go out and post "#relationshipgoals" on social media. I've never considered doing it for real couples, but for a fictional one, heck, Jax and Monroe were simply oh-so-worthy. Five-plus stars go to The Boy I Grew Up With. ♥

Purchase The Boy I Grew Up With on Amazon | Apple Books | B&N | Kobo.