Book Spotlight: A Summer Soundtrack for Falling in Love by Arden Powell 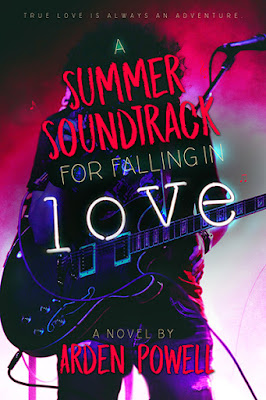 About A Summer Soundtrack for Falling in Love
What he wanted was a music career. What he needed was love.

When Kris Golding leaves his dusty Kansas hometown for a fresh start in New York, he thinks an apartment and a job are waiting for him. But when he finds neither, rather than admit defeat, he takes his chances busking—and meets Rayne Bakshi of international rock band The Chokecherries. Rayne needs a new guitarist, and gives Kris his first break since leaving home.

Rayne wears makeup and glitter and thinks nothing of kissing Kris in front of twenty thousand screaming fans for the attention. Instantly infatuated, Kris begins to question whether he might have a crush on Rayne—could he be bisexual? But since Kris originally claimed to be straight, Rayne’s wary of getting involved offstage.

As their tour gains momentum, Kris’s sexuality becomes the least of his troubles. Between his conservative brother hell-bent on “rescuing” him from his life of debauchery, a peacock that may or may not be the avatar of a cult god, and a publicity stunt that threatens to upend the band, Kris is definitely not in Kansas anymore.

Add A Summer Soundtrack for Falling in Love on Goodreads.

A Note from Arden Powell
Hi, I’m Arden Powell. I’m here to share writing tips, anecdotes, and behind-the-scenes notes about my new release, A Summer Soundtrack for Falling in Love. Comment on my blog tour for a chance to win a $20 Amazon.com gift card!

A Guest Post from Arden Powell
Writing Diversity in Romance

So you want to write a novel—maybe even a romance novel!—and you’ve decided to commit to this diversity thing. You don’t want to write a cast of exclusively cisgender white men, whether they’re gay or straight, because that’s not just not reflective of the real world. (Or, indeed, of any world I want to live in.) But how do you write a cast like that—a diverse, realistic cast with a whole spectrum of races, genders, and sexualities—without accidentally stereotyping anyone, or swerving out of your lane and stepping on #ownvoices’ authors toes? Here are some things I kept in mind while writing A Summer Soundtrack for Falling in Love, which features several races, genders, and sexualities that aren’t my own. I’m told the results weren’t terrible, and therefore I’m clearly qualified to give advice.

About Arden Powell
Arden Powell graduated from St. Francis Xavier University with an Honours degree in English literature and the realization that essay writing is just another form of making up stories. They also came away with an overriding and all-abiding love of semicolons, to the general dismay of their editors.

Arden lives in Ontario with a dog, a fellow human, and an unnecessary number of houseplants.

Giveaway
To celebrate the release of A Summer Soundtrack for Falling in Love, one lucky person will win a $20 Amazon gift card! Leave a comment with your contact info to enter the contest. Entries close at midnight, Eastern time, on November 2, 2018. Contest is NOT restricted to U.S. entries. Thanks for following along, and don’t forget to leave your contact info!