Review: The Specialist by Melanie Moreland (Men of Hidden Justice #5) 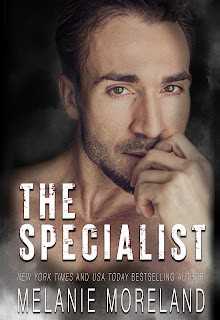 Note: An advance reader copy (ARC) was provided by the author.
Melanie Moreland kicks off 2023 with the fifth and final installment in her Men of Hidden Justice series. The Specialist is Egan Vulpe and Sofia DeSalvo, with the former handling a number of business endeavors after stepping away from all things Hidden Justice, and the latter being a doctor at a local hospital while also serving as HJ's go-to doctor whenever her services were needed. Egan has been in love with Sofia for as long as he's known her, and while he suspects she's drawn to him as much as he is to her, there's a resistance there that he longs for her to overcome. Slowly but surely, Egan shows Sofia how deep his love is for her, and she knows how well loved and protected she is with him. When she's taken by nefarious forces, he's more than prepared to show everyone what he's willing to do in order to protect and save the woman that he loves.
There's no denying that the men who used to be part of Hidden Justice were always ready and willing to go above and beyond for those who mattered most to them--particularly when it came to the women they loved. Egan has been patiently waiting for Sofia to open her heart to him, and once she was, he was all in. The feelings that he had for her were intense, and it was clear how devoted he was to her. As always, Melanie Moreland delivers the romance with a good amount of action and suspense. The former is as sweet as it is steamy, while the latter provides the kind of resolution that doesn't dilly-dally--a much appreciated change from others that tend to take forever. Overall, The Specialist proved to be a four-starred ending to this series.
--------------------------
Read my reviews for the Men of Hidden Justice series: