Audio Review: The Glow Up by A.M. Johnson, narrated by Teddy Hamilton & Michael Crouch (Franklin U #5) 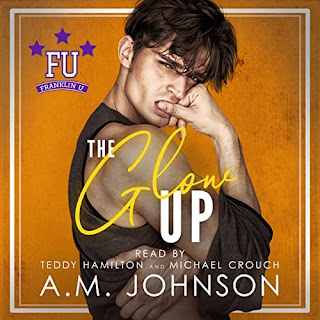 Note: The audiobook was provided by the author via Gay Romance Reviews.
Last year, I was able to read all of the books in the multi-authored Franklin U series, and A.M. Johnson's The Glow Up was the cream of the crop. When I learned an audiobook was in the works, I confess that I was both excited and apprehensive. Experience has taught me that not all books that I've fallen in love with translate well once they're done in audio. But having Teddy Hamilton and Michael Crouch team up to bring Johnson's work of awesome fiction to life was a stroke of genius.
Chris Delaney and Aiden Russo's story is set in Franklin University, with the former crushing hard on the latter over the past couple years or so. They finally meet during an oh-so-awkward massage session, but it's clear that there's a spark of something between them. Both guys have a lot going on in their lives, and the last thing that either can afford is to be distracted by their connection. But what if Chris is exactly the burst of sunlight Aiden desperately needs to guide him out of the darkness?
Is it actually possible for a book to get even better the second time around? Why, yes, yes it can. A.M. Johnson has penned a story and created a cast of characters that were EVERYTHING. Becoming emotionally invested was a no-brainer. Teddy Hamilton was, as always, fantastic in his narration, and while Michael Crouch was new to me, he certainly left one heck of a fabulous impression. Listening to The Glow Up over the weekend was an absolute joy. Five-plus stars on all fronts for this one!
Date Listened to: 02 January 2023
Learn more about A.M. Johnson.
Learn more about Teddy Hamilton and Michael Crouch.
Purchase The Glow Up on Audible.