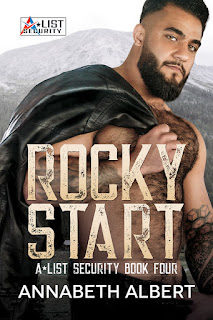 Note: An advance reader copy (ARC) was provided by the author.
Rocky Start is the fourth book in the A-List Security series from Annabeth Albert, and it's a bi-awakening romance between main characters Malik (whose last name I don't recall coming across, but if anyone reading this knows what it is, feel free to let me know what it is!), a former naval intelligence officer, and Avery Haskins, a former Navy SEAL. Both men work for A-List Security, a private security firm specializing in working with A-list clients. When the actress Avery is dating decides to end things between them, Malik decides to help the guy by suggesting they go out for dinner. After a few hours of wining and dining, they hope to spend the rest of the evening gaming...but then they're soon distracted by curiosity and a conversation that leads to a major make-out session. What follows is awkwardness and avoidance, but when the two are assigned to a movie shoot in a remote mountain location, they not only begin to get to know each other a whole lot better--and in ways they only dreamed of--but also learn things about themselves as well.
This book, to me, was all about acceptance, both of oneself and of others. Seeing that Avery and Malik were co-workers who quickly formed a kinship that slowly developed into more as they explored facets of themselves was fascinating. I appreciated the easy acceptance that Malik showed Avery, allowing the latter to feel more at ease in acknowledging that side of himself that he ignored for so long. But that doesn't mean that Avery wasn't a source of support and understanding for Malik because he was exactly that during moments where Malik needed someone to lean on. This also felt longer than the first three books in the series, not that there's anything wrong with that. I liked that the author established a firm foundation on which to have Malik and Avery's relationship evolve over time. It was also great seeing the other couples from the series, as well as a number of supportive side characters. I'm not entirely sure if this is the last book in the series, but if it is, what a high note Annabeth Albert decided to end it on. Rocky Start receives 4.5 stars.
-------------------------
Read my reviews for the A-List Security series: