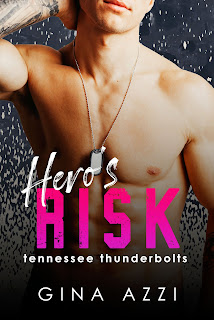 Note: An advance reader copy (ARC) was provided by the author via Wildfire Marketing.
I do believe I've just finished reading my favorite book in Gina Azzi's Tennessee Thunderbolts series (so far)! Hero's Risk is the fifth novel in the series, and it's a second-chance romance featuring Beau Turner, the Bolts' twenty-eight-year-old goalie and a former Marine, and Celine Hernandez, a famous actress and Beau's ex-girlfriend. It was eight years ago when she got the big break she'd been hoping for, leading to a different and far more devastating break between her and Beau. Now, she's back in Tennessee to film a new movie. While people in their hometown and the rest of the Turners are thrilled to have Celine around for an extended period of time, there's one person noticeably not rolling out the proverbial welcome mat. But it seems that no matter where Beau goes, Celine is there as well. He wants to stay away, but that's easier said than done.
This fifth Tennessee Thunderbolts book felt like it had a bit more angst to it compared to the first four that came before it, not that I'm complaining since angst is my jam. Even though it had been nearly a decade since they broke things off, it was clear that there were unresolved issues and the feelings between the main characters hadn't necessarily waned. Beau and Celine had changed a lot in the years they had been apart, so seeing them discovering those new things about each other while rediscovering the connection they had once shared made for a good second-chance romance read. Of course, the rest of the Thunderbolts are around, and one in particular has piqued my curiosity a heck of a lot, and I'm so glad his book will be up next. Hero's Risk will be a 4.5-starred act to follow.
-------------------------
Read my reviews for the Tennessee Thunderbolts series: