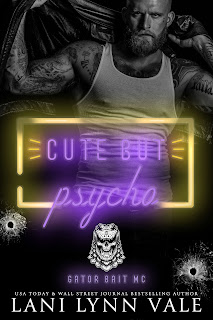 Note: An advance reader copy (ARC) was provided by the author via Uplifting Author Services.
Can I just say that one of the best things about Lani Lynn Vale as an author is that there aren't any overly long waits between books when she writes a series? I'm adoring her Gator Bait MC series so far, and being able to have the next book in the series every couple or so months has been awesome. We're up to book three in the aforementioned series, and Cute But Psycho was as entertaining as I expected it to be. In short, this series has proven to be par for the course, and I do hope it continues throughout what remains.
Cute But Psycho is Etienne LaFayette and Matilda Deveraux's story. Both come from wealthy families but have had their share of experiences that don't exactly make you think of privilege. The thirty-eight-year-old spent six years in prison, and he's now getting his construction business back under his control. She's about a decade younger and has dreams of opening a veterinary practice with her best friend but struggles with money due to a devious stepmother. But while they have mutual friends, Matilda's impression of Etienne isn't that great. What will it take to change her opinion, and what could it lead to?
The twosome of Etienne and Matilda was a force to be reckoned with. I adored getting to know these two main characters and their story held my attention from start to finish. Etienne was someone who had Matilda's back, but he wasn't the only one either. He ensured that she was protected and cared for, something that she wasn't getting from her own family. As for Matilda, she showed a lot of growth, going from the woman who, at times, was made to feel unworthy to someone who knew she deserved far more. The antagonists were truly heinous, with nary a thing about them worthy of redemption. But Etienne and Matilda had the best happily-ever-after, and Cute But Psycho grabs five stars.
-------------------------
Read my reviews for the Gator Bait MC series: