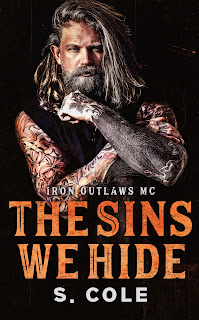 Note: An advance reader copy (ARC) was provided by the author via Wildfire Marketing.
When Scarlett Cole announced last year that she would be launching a new series and would do so with a new pen name, S. Cole, I was intrigued and excited for what was in store for readers like me. And now, here we are in the first couple years of the new year, and the Iron Outlaws MC series has gotten off to a fantastic start. The Sins We Hide is our initial foray into this motorcycle club consisting of one-percenters in their home chapter of New Jersey. If you're hoping for swoon and sweetness, that's not what you're going to get in this series starter, and I suspect in the rest of the series. This has a darker tone to it compared to the author's previous work, but that doesn't mean there isn't any romance. There is most definitely romance to be found between the covers--just of a grittier, more raw kind of romance, the kind one expects from an MC romance.
The Sins We Hide features the Iron Outlaws' vice president, Landon "Clutch" Bailey, and the twin sister of the club's president, Guinevere "Gwen" Hills. The last time either of them saw each other was a decade and a half ago. They were both thirteen and Gwen and her mother had upped and disappeared, leaving behind the club that Gwen's father was the president of and never to be heard from again. That is, until Gwen shows up at the clubhouse on the day that her father was buried and shocks her twin, Uther, aka King, with news that their mother was murdered around the same time their father was involved in what the club believed was an accident. Gwen isn't exactly welcomed with open arms, not with how she left then and not with how she looks down on the club now. Add to that the fact that she and Clutch aren't the same people they were years ago. They'll need to rebuild the trust, but the connection they once had? It looks like that's still very much present. Will that be enough for everyone, though, once past transgressions demand retribution at all costs?
Welp, consider me hooked! S. Cole certainly brought it, and by "it" I mean that mix of dark romance, suspense, and all good things in between. I was instantly intrigued by the Iron Outlaws and what they stood for. The romance between Clutch and Gwen was filled with history, and they needed to resolve feelings and issues that formed and festered in the fifteen years they were apart. There was also all those thoughts and emotions regarding the club itself and the impact its had on Clutch, Gwen, and their respective families. Theirs was a story about reconciliation, and not just in terms of personal relationships, but reconciling their relationship with and within the club. This book had romance, sex, mystery, and suspense, and it has set the bar high for all the other books to follow in the series. I loved everything that The Sins We Hide had to offer, and if the rest of the series are as good as this first one, this could possibly be an all-time favorite. Five stars!
Release Date: 12 January 2023
Date Read: 08 January 2023
Learn more about S. Cole.
Purchase The Sins We Hide on Amazon.