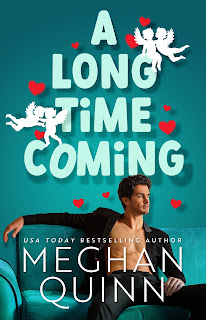 Note: An advance reader copy (ARC) was provided by the author.
The Cane Brothers are in a class all their own, and readers have Meghan Quinn to thank for bringing them into our consciousness. We first had oldest brother Huxley in 2021, then there was Jonah, aka JP, last year. And now, we have the baby of the family to kick off 2023. Breaker Cane's story is a friends-to-lovers romance, one he shares with his best friend, Ophelia Fairweather-Fern, better known as Lia. When his bestie announces her engagement, there was no question that Breaker was going to be a part of her wedding entourage. Sure, a bride usually has a maid of honor, but who says she can't have a Pickle of honor, erm, I mean, man of honor instead? Breaker is ready and willing to do anything and everything necessary to make sure the wedding goes off without a hitch. There isn't much time since Lia's soon-to-be mother-in-law insists the wedding be over and done in five weeks. But with time running out before Lia becomes Mrs. Beaver (And yes, that really is her name), Breaker is starting to wonder if this bride should run away...with him.
Ah, Breaker! Could a guy be any sweeter than the youngest among the Brothers Cane? He loved hard and there was no denying his loyalty to those who mattered most to him. He and Lia just clicked from the get-go, and I loved the friendship they shared. One of my favorite things when it comes to the friends-to-lovers trope is that there's an already established relationship, and it's the transition from platonic to romantic that piques my interest. Breaker and Lia's story was one that was filled with hilarity, especially as Breaker was coming to terms with the realization that he wanted and needed Lia in ways he never imagined and what he was going to do about it. Breaker's brothers, Huxley and JP, definitely added to the comedy part of this rom-com, although to be fair, they did offer up some rather helpful advice (at times) when it came to Breaker pursuing Lia. While Huxley remains my favorite among these three, Breaker came REALLY close to nudging the former down a spot. All in all, A Long Time Coming was a fun-filled five-starred read.
-------------------------
Read my reviews for the Cane Brothers series: