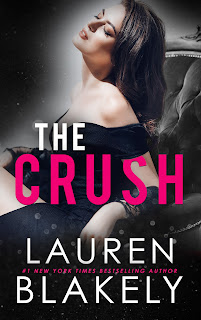 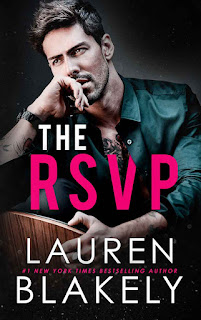 Note: An advance reader copy (ARC) of The RSVP was provided by the author. The Crush is a personally owned copy.
Lauren Blakely's got a new series, and while the prequel novella closed out the year and left readers anticipating what lay ahead for the main characters, the full-length novel delivered a forbidden romance that was worth waiting for. The Crush was a free novella that introduces readers to Harlow Dumont Granger and Bridger James. She's twenty and tackling a double major in college; he's thirty and co-owns a television production company with Harlow's father. It's in this prequel where we begin to see not just Harlow's crush on this man who is ten years her senior and someone who works with her only living parent, but also glimpse into her dysfunctional relationship with her father. For any reader who didn't have the opportunity to grab the novella while it was available, it IS included in the actual novel, so no worries on that end, and make sure to read it first.
While The Crush highlights the initial stirrings of Harlow's infatuation, The RSVP is where we see Harlow gain the courage to pursue her feelings, Bridger try to deny his fast growing attraction, and both figuring out what happens should they act on it all. Theirs was a slow burn romance, and readers have a front row seat to them developing a friendship of sorts alongside the flirtation and banter. I loved the growth, not only in terms of the main characters, but their relationship as well. It felt organic to me, flourishing over time. Yes, there was a ten-year age difference between Harlow and Bridger, but the former had a maturity to her that made her more of a peer to the latter than even her own father who was Bridger's business partner. These two simply meshed so darn well together, and rooting for their happily-ever-after was an inevitability for me.
Aside from the romance, another point of interest was Harlow's relationship with her father. Sure, he adored her, but he also didn't seem to realize that she was a fully functional adult who not only learned to survive after her beloved mother passed away, but she thrived through everything that came her way. I wasn't a huge fan of Ian Granger's, whether as a father or a husband, although less so when it came to being a parent than a spouse, but kudos to Harlow and Bridger for handling things without a whole lot of drama. All in all, Lauren Blakely has served up a romance with a tad more angst than can often be found in her romantic comedies, and The RSVP has turned out to be a great beginning to her new The Virgin Society series. I'm already looking forward to books for Layla and Ethan, plus Hunter in Limited Edition Husband. 4.5 stars for The RSVP.
Release Date: 04 January 2023
Date Read: 27 December 2022
Learn more about Lauren Blakely.
Purchase The RSVP on Amazon.
*Previously free on e-retailers, The Crush is no longer available.