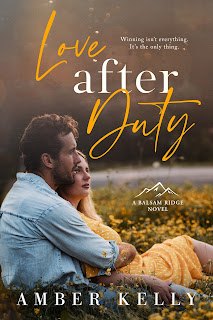 Note: An advance reader copy (ARC) was provided by the author via Wordsmith Publicity.
Amber Kelly takes us back to Balsam Ridge, Tennessee with the fourth book in her series that shares the same name as this fictional town. Love After Duty is an enemies-to-lovers romance featuring thirty-seven-year-old Isley Paysour and thirty-nine-year-old Langford Tuttle. There had been animosity between the Paysours and the Tuttles even before Isley and Langford and their respective brothers were born, but it took a moment of teenage embarrassment that led to Isley making Langford the target of her ire while they were in high school. Years later, she's back in their hometown to be there for her parents and is encouraged to make a run for mayor. She enters the race knowing that she's running unopposed...that is, until her old nemesis throws his hat in the ring. Family rivalry is one thing, but a burgeoning attraction between the two candidates? Talk about complicated.
You'd think with the whole family rivalry thing, this would be a story and characters laden with drama, but surprisingly there wasn't much to speak of--and that isn't necessarily a bad thing. Even a reader like me who enjoys a fair bit of angst in her books looks forward to a story that is mostly lighthearted with a dash of angst. Both main characters brought with them interesting back stories, and the sexual tension between them was on-point. I enjoyed their banter, and seeing everything develop between Isley and Langford made for some great reading. Having the rest of the Tuttles around added to the entertainment factor; on the other hand, Isley's parents and their part in the story was heartrending, but not depressingly so. Love After Duty was a wonderfully written addition to the Balsam Ridge, which is why giving it 4.5 stars out of five was a no-brainer.
--------------------------
Read my reviews for the Balsam Ridge series: