Review: How to Lose at Love by Sara Ney (Campus Legends #1) 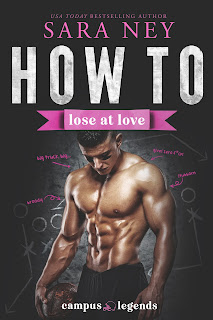 Note: An advance reader copy (ARC) was provided by the author.
Sara Ney starts of the new year with a new series, and what a strong beginning she offers up readers with How to Lose at Love. This first novel in the Campus Legends series, and this college romance features the fake relationship trope. Our main characters are Dallas Colter, twenty-one, college senior, star quarterback, and already touted as a future superstar in the professional leagues, and Ryann Winters, twenty, college senior, and sees herself as just your everyday girl. When Dallas's teammate pays him to break up with Ryann, he does it like he's ripping of a Band-Aid--quick and easy--and very much to the point. However, his agent informs him that he needs to work on his not-so-stellar reputation by being seen in public with someone deemed respectable, the one girl Dallas can think of that fits the bill is none other than Ryann. Convincing her may not be that easy, not when he broke up with her on his teammate's behalf. But then she agrees, and the more time they spend together, the more difficult it'll be for them to convince themselves that this is all pretend.
It's clear that Sara Ney knows her way around college romances, so whenever she's got a new release, readers know they'll get an entertaining new adult read. When it's a series starter, there's an extra bit of excitement, especially when it happens to be a spin-off! Dallas is Duke Colter's younger brother, Duke being the male main character in the fourth Accidentally in Love book, The Secret Roommate. Dallas is cocky, but then he knows just how good he is when it comes to the sport that he loves. Ryann most certainly gave him a run for his money, and she taught him a thing or two when it comes to being with a girl who was meant to be more than just a hook-up. I loved seeing them go from two people who were somewhat wary of each other to unlikely friends who had a habit of flirting and then on to so much more. Aside from their romance, I enjoyed seeing Dallas with his younger brothers, and I'm looking forward to reading their books in the future. Ney has definitely gotten her Campus Legends off to a great start, which is why How to Lose at Love snags four stars.
Release Date: 19 January 2023 17 January 2023 (early release)
Date Read: 13 January 2023
Learn more about Sara Ney.
Purchase How to Lose at Love on Amazon.