Review: The Muse by Emma Scott (Angels and Demons #2) 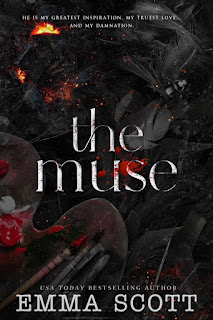 "They call it falling in love for a reason, don't they? Because that's what you do. You fall and if the object of your love isn't there to catch you, you shatter into a million pieces. Or you burn to ash."

Sublime. Absolutely, unequivocally, simply sublime storytelling is what lies between the covers of Emma Scott's first novel for 2023, and it's the second book in her Angels and Demons series. I kid you note when I say that The Muse has been sitting atop my wishing-hoping-thinking-praying list ever since I finished reading The Sinner in August of 2021. When Scott announced that she was back to working on Cole and Ambri's story, I couldn't help it--I may have whooped in utter excitement. And once their book landed in my Kindle Fire? I couldn't wait to dive in--what a glorious fall it was, leaving me in awe and humbled that I've had this privilege to be a part of it all, even if only as a mere observer.
When readers first met Cole Matheson and Ambrosius Edward Meade-Finch, aka Ambri, in The Sinner, they made quite an impression, enough that I wasn't the only one hopeful that Emma Scott would weave her magic through her words. I was sucked in by the imagery those words created, and I wouldn't have wanted to be in any other world than the one that this author put together during the three and a half hours I spent in it. This novel wasn't merely about the struggle between This Side and the Other Side. After all, life isn't always black or white--but it isn't also just gray in the middle. This story is not just about love conquering all--it was about free will and the realization that not even happily-ever-afters come for free and that making certain choices that require sacrifices.
Amidst the romance and the paranormal, there is a poignancy in Cole and Ambri's tale. It makes you contemplate and feel and come to realizations. There's a part in the story where Cole speaks on grief, and I confess, I cried because I knew firsthand what he meant. The grief remains, but the gratitude for what you had stays as well. This book gave me pause--all in the best ways possible. I relished every word on every page in every chapter, and saying that The Muse is my first five-plus-starred read for 2023 makes me smile because it's a reminder that wishing, hoping, thinking, and praying actually works.
-----------------------
Read my reviews for the Angels and Demons series: