Review: Rescued by Love by Melissa Foster (The Ryders #4) 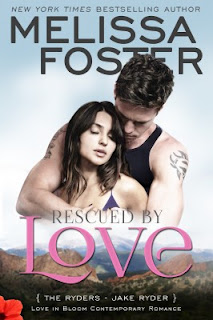 Rescued by Love is the fourth novel in author Melissa Foster's The Ryders series, which is part of her umbrella series, Love in Bloom. This latest installment to the ongoing series takes readers back to Elpitha Island as Gabriella Liakos and Duke Ryder--whose story is told in the second book, Claimed by Love--tie the knot among family and friends, and has Duke's brother and Gabriella's best friend--Jake Ryder and Addison Dahl, respectively--finally giving in to their baser instincts and lustful urges. But while Jake may want more from Addy, she isn't as receptive to the idea of something past a post-wedding hook-up. Being monogamous hasn't been something either one of them has ever actively looked for, and Addy isn't looking to change things up, even if Jake is the living, breathing epitome of her fantasies. There are reasons why she has rules when it comes to men, and breaking those rules, especially for a man like Jake, could be disastrous. She has never seen herself as a woman in need of rescuing, but can Jake convince her that all he wants is to be the only man who stands by Addy's side for the rest of their lives?

Addy and Jake seemed to be the perfect pair, with the same wants and needs and neither one of them being all that shy about expressing those needs and wants. But while Jake is ready for more than one night, Addy thinks differently, trying to convince herself that she doesn't want what Jake wants. I liked that she was independent and wasn't afraid to be a single woman with a healthy appetite for sex. Not every woman, after all, is looking for a white picket fence and one man to spend the rest of her life with. It did get to a point, however, that Addy became more of a stubborn heroine, someone who was overly insistent on sticking to something that, had she been honest with herself and with Jake, she had already begun to change her mind about. On the other hand, I really liked Jake. He was persistent but not overbearingly so, and I adored how he was with his family, especially since one the consistent overall themes of the series is love for family. While this may not have been my favorite book in the series, Rescued by Love was a good romance read, with tamer sex scenes than I would have anticipated. Four stars. ♥

Read my reviews for The Ryders series: