Review: "You're So Fine" by Kieran Kramer 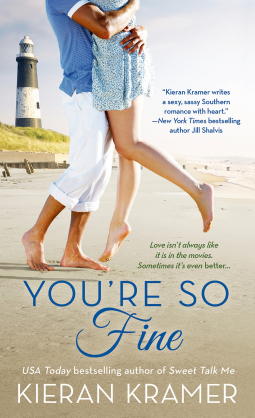 You're So Fine is a contemporary romance written by Kieran Kramer and is the first book by this particular author that I've read. This is a multi-layered story of a single mother trying to find her niche in the world and swearing off romantic relationships with actors. A twist of fate has her sharing a lighthouse with one of the most famous and sought after actors in Hollywood and what follows is the evolution of their relationship as a couple and their own personal evolutions as individuals with childhoods that emotionally scarred them.

Lacey Clark has pretty much had to fend for herself for as long as she can remember, but then she's never really put herself first. Her father died when she was very young and her mother and stepfather have never been very supportive of her. Her ex-boyfriends may have been good looking actors but neither of them gave her the happily-ever-after she wanted. The one good thing in her life is her adopted son Henry, and as they try to re-start their lives on Indigo Beach, the unexpected appearance of a certain actor will make them realize what they've both been missing.

Beau Wilder likes being an actor and the fact that he's made a name for himself in big-budgeted blockbuster movies. When he's forced by a contract he signed at the beginning of his career to work on an independent film so far and beyond what he's used to doing, he foresees a tortuous few weeks of shooting. What he doesn't plan for is sharing a lighthouse with a single mother who both captivates and frustrates him and her young son who brings light and laughter and discovering that he's much more than he gives himself credit for, both as a man and as an actor.

A former actress in B movies, Lacey has earned herself a reputation as being a jinx and overly opinionated, cutting short whatever career in show business she was hoping for. Since then, she's tried to find her footing in jobs that she knows she can handle. What she needs, however, is something more permanent, especially since she's promised Henry that they would finally call one place, Indigo Beach, home. She's not prepared to get involved with someone like Beau, especially since she knows his career is going to be taking him places, both literally and figuratively.

Beau may have come from old money in South Carolina but he's worked hard to become independent and create a brand in the movie industry. Behind the fame and fortune lies a past that has made Beau question his parents' marriage and their family. While he knows he can't give Lacey the sense of permanence that she needs and deserves, Beau finds himself falling for her and little Henry. But even as he's ready to offer her some sort of security regarding their relationship, Lacey lets him go, believing that it's for the best and that he isn't ready to commit to a life with her and Henry.

I'll be honest, it took a while for me to warm up to the story and the characters, specifically Lacey. I couldn't convince myself that there was any real chemistry between her and Beau and there was something about her that just didn't appeal to me right away. By the second half of the book, my opinion of her started to improve, though it did flip-flop for a bit. She was like this strange mix of a bossy Southern belle and a needy martyr. But, like I said, she did grow on me and there were definite moments that I was cheering her on, wanting her to finally stand up for herself.

While I did have some back and forth with regards to my feelings on this book, by the time I had finished reading it, I felt satisfied and happy with the outcome. The twist regarding little Timothy Brenner was interesting though I did have questions with the lack of familiarity of the lighthouse and location from one particular character. I also wondered about the motivations regarding some of the actions of the main characters. Still, it was a pretty good read and maybe something that readers wanting some Southern romance will want to check out. You're So Fine gets 3.5 stars out of five. ♥

Pre-order You're So Fine from Amazon | Barnes & Noble | Kobo.