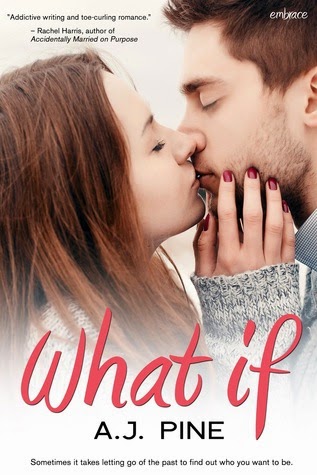 What If by A.J. Pine is the second book in the If Only series and I'm going to be upfront about this and say that I went into the book with a bit of trepidation because of my reaction to the first book in the series. As I mentioned in my review of If Only yesterday, I had somewhat of a love-hate relationship with both the story and the lead characters. It felt more like a young adult (YA) read rather than a new adult (NA) one. Still, one of the standouts in that book had to be Griffin Reed, the assumed manwhore (though he wasn't one at all in that novel) with a heart. When I started reading book two, I was pleasantly surprised at how much more mature the tone of the characters and story were and I read the whole thing in one sitting. ♥

Two years ago, Griffin Reed found himself falling for a girl who was in love with someone else. Since then, he's back to leading the rudderless life he's been wading in, a life he doesn't necessarily want but does nothing to change his circumstances. He doesn't know what he wants to do with his life and continues to stay on the path that his father has selected for him. But Griffin is far from the picture-perfect son that is expected from a family like his. He gets into random fights and steers clear of any committed relationships, believing that he doesn't really have much to offer. When he sees a hitchhiker on the side of the road, he has no idea his journey is about to veer off-course.

Maggie Kendall has been given a second chance at life, but what kind of a life can she possibly have if she can barely remember simple things like where she left her phone or what time her bus leaves, what more lifetime memories that she can cherish? She copes with her circumstances as best she can, taking photos of the people she interacts with at her job and making sure she always jots down reminders and notes on Post-Its. She takes medication and knows what triggers to stay away from so that she doesn't suffer from setbacks. What she doesn't prepare herself is the driver of a truck that stops to pick her up on the side of the road and there's simply no way that she can stay away.

Griffin and Maggie have several things in common: they both don't do the whole dating thing, they both have secrets, and they're both broken. However, they decide to pursue the non-dating even though it's obvious that what they're actually doing is dating. Even when fear and insecurity creep up on them, there's simply something about one another that draws them even deeper and closer. Being together makes them begin to believe that a future could be a possibility. But then the self-doubt comes back and they both find themselves pushing the other away. For these two to actually have a chance at a future together, they'll need to stop asking "What if?" and begin moving forward, leaving the past and doubts behind.

Okay, whatever doubt I had going into this book totally dissolved within the first few pages. I absolutely loved the story of two individuals believing themselves to be so broken beyond repair but find the perfect person in the other. I liked that these two didn't require each other to fix whatever needed fixing within themselves but rather were inspired to see the possibilities that were laid out before them and taking chances to be and have more. This book reinforced just how great a character Griffin was in book one and A.J. Pine took him several steps higher, making him a book boyfriend worth remembering. And Maggie was simply the ideal character to partner him with. I adored these two! ♥

An added bonus to this story was seeing where Jordan Brooks and Noah Keating are two years after the events in the first book, as well as the oh-so-adorable twosome of Elaina and Duncan. Yes, I liked Elaina and Duncan more than I did Jordan and Noah but at least all the angst from the main characters in If Only was a thing of the past and they've all moved on. Of course, now that I've read book two, Griffin and Maggie are now my new favorite couple and I really enjoyed Miles and Paige, Maggie's co-worker and neighbor, respectively, and both her close friends who know all about her secret and give her the support she needs, especially when Griffin becomes a part of her life.

What If is definitely going on my list of favorite reads for the year and I have no qualms about giving it five very much deserved stars. Averaging the two ratings for the two books, the series gets a four-star rating from me. I'm not sure if there are any other books that will be included in the series but this definitely set the bar really high so fingers crossed that future releases will meet or even surpass that bar. ^.^ I'm so in love with this book that I'll be pre-ordering it even though I already read the ARC. I highly recommend What If to my fellow bookaholics and declare it a must-read for anyone out there wanting a love story worth fighting for and reading about. ♥

Pre-order a copy of If Only on Amazon | Barnes & Noble | Kobo.