Review: "The Unseemly Education of Anne Merchant" by Joanna Wiebe 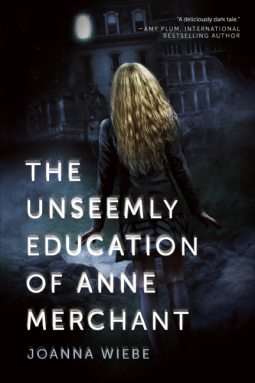 Note: This ebook was provided by BenBella Books via NetGalley in exchange for an honest review.

The Unseemly Education of Anne Merchant is the first book in The V Trilogy by Joanna Wiebe and is a young adult (YA) paranormal novel. A high school junior named Anne Merchant is sent to Cania Christy, a very exclusive boarding school in Maine, and is far different from warm and sunny California as she could have imagined. The more time she spends in the school and in the strange community that's separated by a red line on the ground, the more questions that seem to have no logical answers pop into her head.

Anne Merchant feels like she sticks out like a sore thumb in her new school. Everyone there is flawless and obviously come from more than well-to-do families. She's far from perfect physically and her father would never make it onto Forbes' list of wealthiest men in the country. Her curiosity grows as she doesn't get any direct answers to her numerous questions. The people around her seem to be in on a secret and she's the only one who isn't in on it.

The school has it's own set of bullies but Anne has found a friend in Pilot Stone, a fellow junior who appears to be an anti-establishment sort of guy. He's nice and all but the one student who's truly captivated her is none other than Ben Zin, a senior who tries to keep his distance from her, making her believe that her affections are one-sided. But the few times they do interact, it's almost as if he tries to leave her breadcrumbs on her quest to learn the truth about Cania Christy.

This is a really long book and admittedly, I had to take several breaks from reading it. The first part is kind of slow but the second half more than made up for it because there were several twists, some unexpected, others guessed, that kept quite entertained. The book reminded me somewhat of another personal YA paranormal favorite of mine, The Unbecoming of Mara Dyer, even though the stories are rather different. It was the whole creepy vibe and I'm all for anything creepy. ^.^

The book does end on a cliffhanger and it's enough of one that makes me want to know what the heck happens next to Anne, Ben, and the rest of very strange people of Cania Christy. Thankfully, the sequel is due for release in just a matter of weeks so the curiosity of fans of this first book will finally be satisfied. I'd recommend The Unseemly Education of Anne Merchant to fans of YA books who like a mix of mystery and suspense in a paranormal sense with a hint of romance. This gets four stars! ♥

Grab a copy of The Unseemly Education of Anne Merchant on Amazon | Barnes & Noble | Kobo.