Review: "The Publicist: Books One & Two (The Publicist & Shelf Life)" by Christina George 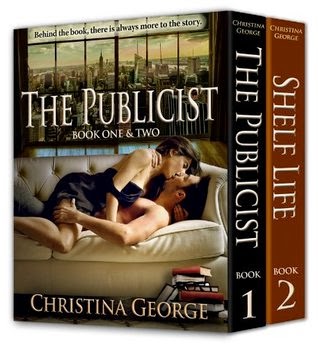 I was able to get the first two books in The Publicist series by Christina George for free on Amazon a little over a month ago. I had already noticed the first book when it was initially released and the premise of a publicist in the world of publishing definitely piqued my interest. So, naturally, when the boxed set of the first two books was suddenly available for free, I simply had to do what I do best and snapped it up! ^.^ Then, the third and final book in the series was available for reviews on NetGalley and, yes, I requested and was approved. I love it when everything just falls into place! ♥

The first book, The Publicist, introduces readers to Katherine "Kate" Mitchell, publicist extraordinaire at Morris and Dean Publishing. Hers isn't the easiest of jobs, especially when she's saddled with authors threatening to jump off a building's ledge or forever stuck in diva mode, but she does her job well. She wants her authors to be put in the best light possible because that'll mean more sales and help her stay on top of her game. Things only begin to get complicated when she starts to fall for Mac Ellis.

In the world of publishing, the name MacDermott "Mac" Ellis is well-known, what with him being one of the best editors around. He's well-respected and has been with Morris and Dean Publishing for two decades. While he may enjoy success professionally, his personal life leaves much to be desired. He's been married to the same woman for many years and has two great sons but he and his wife have long drifted from each other. He's had affairs before but no one has affected him as much as Kate Mitchell.

Kate and Mac have known each other for a few years and though they've become closer, neither of them has crossed the line. Kate is very much aware that he's married and she's heard rumors of his many affairs. Mac knows Kate would never even consider indulging in an affair with someone like him, plus he knows she's different from the other women. But as they spend more time together, Mac decides to take his chances and Kate wonders if taking the risk will be worth the heartache she knows is inevitable.

Add to that Kate's close friendship with Allan Lavigne, an author who wrote one novel that's still considered legendary in the book world but hasn't published anything since then, and her connection with his nephew Nicholas "Nick" Lavigne. Nick has everything that would qualify him as the perfect guy: he's good looking, successful, intelligent, and a truly nice guy. Oh, and he's single. But there are only two things that seem to grab her attention at the moment: her work and Mac.

The second book, Shelf Life, picks up soon after the events of the first book. Kate Mitchell is still very much consumed by all things publicity and all things Mac Ellis. However, life as she knows it begins to unravel as her suspicions regarding one particular author turn out to be nothing compared to the reality that's about to take her without warning. At the same time, she feels betrayed by the one person she thought she could count on to be by her side.

Kate then decides to take Nick Lavigne up on his offer to visit California and take some time off from all the crap that's hit the fan in New York. There, she gets a better perspective on what it is she now wants to do with her life, though that works out well for her professionally and not really personally since she's still very much in love with Mac. But Nick is able to give her the peace and stability that she needs and she clings to him with almost everything she's got...minus her heart, of course.

When Mac shows up in California, he lets Kate know about certain decisions he's made while she's been away and Kate is taken aback by it all. It seems as if he's done all it for her and now she needs to make a choice between two very different men who love her and if her life is meant to be in California or New York. With her evolution from publicist to publisher, Kate's life is about to hit high gear but is she really ready for the good and bad that life is about to offer her?

I quite enjoyed reading both installments. The story was unique and well told while the characters were engaging and multidimensional. Kudos to having a strong female lead character who had her share of flaws and no excuses were made for them other than she was human. She was able to make difficult choices and proved that she was capable and independent. Nick was the perfect guy but I totally got why Kate was so drawn to and in love with Mac. The supporting characters were also interesting.

As far as the negatives, there were several editing errors in both books and there were times that the pacing slowed down. However, there weren't any major faults that took away from the reading experience as a whole. This wasn't exactly what you'd call a quick read but it felt as if time just passed by without me noticing it because I was engrossed with what was happening. I'd happily recommend The Publicist: Books One & Two (The Publicist & Shelf Life) to other readers and give it an average of four stars. ♥

Grab a copy of The Publicist: Books One and Two from Amazon.

You can also get the books individually:
The Publicist - Amazon
Shelf Life - Amazon