Review: "Playing with the Drummer" by Robin Covington (Head Over Heels #3) 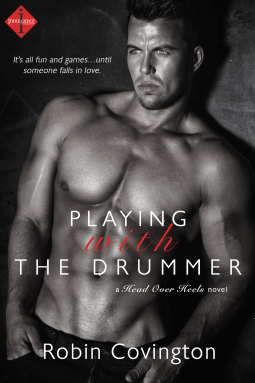 Playing with the Drummer by Robin Covington is the third and final novel in the multi-authored Head Over Heels series. This is a second chance romance and focuses on rock and roll band The Rift's drummer and an entertainment journalist who meet four years ago and spend three amazing days together only to have it all suddenly end when he suspects her of using him for a story. Fast forward four years later and they have no choice but to spend time together while celebrating the upcoming wedding of their friends.

Lita Matthews is an ambitious entertainment journalist who's working her to getting her own television show. Being invited as a guest to what's touted to be the biggest and most talked about wedding of the year will definitely help with that goal, all thanks to her being best friends with the bride's older sister. However, she doesn't want to abuse her friendship and refuses to be sucked into tabloid journalism. If only she can convince the one guy she's ever fallen for to believe she has no ulterior motives.

Rocky Cardano may be part of the world's most famous rock band, The Rift, but he's also known as the one member who doesn't like having the spotlight shone on him. He has his secrets and simply wants his privacy respected. He doesn't trust entertainment reporters, especially after having his location divulged during a trying time in his life by the very woman he spent three unforgettable days and nights with four years ago. Now, he's going to make sure she doesn't betray the trust of his friends the way she did his.

Even with all the tension between them and the fact that he doesn't trust her, Rocky and Lita can't deny that the pull they felt in Mexico is still very much alive. Rocky begins to see her differently when he sees her at work and suggests that they deal with their attraction in the manner they know best while they're stuck in Montana. But as their feelings from before come back with a vengeance, will they be able to deal with the reality of who they both are when a less than flattering video of their friends surfaces?

I liked the dynamic between the lead characters as well as the one they shared with their friends. There's definite chemistry between Rocky and Lita and unlike the two other books in the series, there's a history there that has made them wary of each other. Lita wants to be able to redeem herself and it's obvious that she's regretted what she did to him after he ended things with her. Rocky's lack of trust is understandable but it does wreak havoc on his relationship with Lita time and again.

Playing with the Drummer was the perfect way to end the Head Over Heels series and definitely became my favorite among the three books. It wrapped everything up in a manner that left me more than satisfied and I even ended up liking Lori Hanover, the female lead character from the first book (I wasn't a fan of hers while reading book one)! There were some editing issues but since this was an ARC, I'm going to keep my fingers crossed that they were addressed. ^.^ Book three gets 4.5 stars out of five! ♥

Pre-order Playing with the Drummer from Amazon | Barnes & Noble | Kobo.