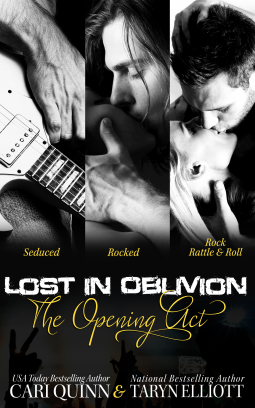 Note: This boxed set was provided by Fido Publishing via NetGalley in exchange for an honest review.


The Opening Act is a boxed set consisting of three books in the Lost in Oblivion series by bestselling authors Cari Quinn and Taryn Elliott: a prequel novella entitled Seduced, the first novel entitled Rocked, and another novella entitled Rock, Rattle, & Roll. If you're reading the three separately, they should be read in the order listed above. The boxed set also includes several bonus scenes, two of which are Christmas-related and one that has an alternate POV from an integral part of the first novel.

Nick Crandall, Simon Kagan, Deacon McCoy, Gray Duffy, and Jazz Edwards make up the band that is Oblivion and the series basically covers their struggles as individuals and as a group, both professionally and personally. Nick originally started the band with his friends Simon and Snake before they met Deacon. After Snake was hauled off to rehab for drug addiction, Deacon met Gray and Jazz and the two were added to the group, bringing together five talented but flawed people waiting for that one proverbial break that will hopefully open more doors for them.

Seduced basically sets the stage for how the Nick, Simon, Deacon, Gray, and Jazz came together and how it wasn't exactly easy sailing from the get-go. After all, Jazz was basically replacing the band's original drummer who just happened to be a close friend of the group's founders plus Gray was an obviously gifted guitarist but the group already had its requisite number of those. Readers will be able to see the roles and not just the instruments each of them play and how the dynamic changes just as they're about to be noticed by someone in the music industry.

Rocked is the love story of Deacon McCoy, the group's bassist and resident responsible adult, and Harper Pruitt, one of the chefs for the tour that Oblivion is part of. Harper knows what life is like on the road, experiencing it firsthand as the daughter of two professional roadies, and isn't looking for anything to distract her just as her career as a chef is about to take off. There's something about Harper that captures Deacon's attention and when all the flirting between the two of them turns into something far more intense, a fling turning into forever sounds good on paper but is easier said than done.

Rock, Rattle, & Roll is a novella that takes place soon after the events in Rocked, and suffice it to say that the full-length novel MUST be read prior to this one. Everything about Deacon and Harper's relationship has been on hyper speed since the beginning and just when they seem to be enjoying slowing down and enjoying one another, Harper makes a discovery that's about to turn their world upside down. With all the changes that they're both going through in their respective careers and in their relationship, Harper and Deacon need to decide if this new development is something they both want and need right now.

Okay, I'm just going to go ahead and say it: I am officially hooked on this series and after reading all those hundreds of pages, I couldn't help but grin. I was a satisfied and happy camper and while my opinion of Nick has been flip-flopping as I moved from one book to the next, I am simply smitten by Deacon. Goodness, I get why Harper can't seem to get enough of him! The other members have also piqued my curiosity and I'm interested to see what happens with Simon and his violin girl and Gray and Jazz. I'm also pretty sure Nick will have me cheering for him again when we get to his own book.

I've read my fair share of rock star romances but what I'm truly loving about the Lost in Oblivion series is that we get to see the highs and lows of the band and each of the members, making me become more invested in them as a whole and separately. I want happily ever afters for them in both professional and personal arenas because these five have obviously struggled and are reaching high for their brass ring. I'm going to give The Opening Act 4.5 stars out of five and am now off to start Twisted! ♥

Grab a copy of The Opening Act on Amazon | Barnes & Noble | Kobo.