Review: "More Than Exes" by Elizabeth Briggs (Chasing the Dream #0.5) 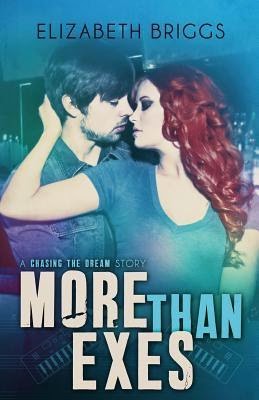 More Than Exes by Elizabeth Briggs is a prequel novella in the Chasing the Dream series. Originally released after the first book in the series, I ended up reading this prequel prior to reading More Than Music since I have a thing about reading books in order. This was able to provide a bit of back story regarding the members of Villain Complex, an aspiring rock band. Funny enough, I had downloaded this novella as an Amazon freebie before I even noticed that book one was up for review on NetGalley. I took it as a sign that reading both was meant to be. ^.^

One look at Kyle Cross and the first thing that may pop into someone's head would probably be "bad boy". This tatted-up keyboardist for Villain Complex, a band that he started with his brother Jared, and college student may look like someone parents warn their daughters to stay away from but he's actually a really nice guy. However, nice guys don't always get the girl, evidence pointing to the broken heart Kyle was left with after the one girl he's ever loved dumped him after their high school graduation and the fact that Jared is the one the female folk flock to.

When their bassist, Becca, goes missing on the night their slated to go up against their rival school, Kyle, being the problem solver that he is, decides to go looking for her. Unfortunately, their van won't start and the one person who offers to help him out is the same person he never expected to see after she ended things with him three years ago--his ex-girlfriend Alexis Monroe. Gone are the preppy clothes and clean-cut look, replaced by fiery red hair, leather, and new tattoos added on to the infinity design they both got together. But has she really changed or is it merely on the surface?

The feelings that Kyle and Alexis once shared never really went away but even with explanations and apologies, are two people who were fundamentally different years ago able to make things work now that they're older and a bit wiser or are they destined for more heartbreak? Does Kyle have to change who he is, an all-around nice guy, just to succeed in life or is it actually possible that nice guys finish first and win at life and in love? Ah, second chance romances, when done the right way, they're irresistibly charming, and when not, they feel forced and boring. Thankfully, this one falls in the former category. ^.^

More Than Exes successfully does what I expect prequels to do: provide some back story on one or more of the lead or recurring characters and whetting my appetite for the rest of the series. This was a quick read but I didn't feel as if anything was missing from the story since the reason behind Kyle and Alexis' break-up was explained and there was still conflict amid the reconciliation second chance romance readers want. There was even a sprinkling of humor, courtesy of a drunk Becca in the backseat of Alexis' car. All in all, a nice start to the series and deserving of a four-star rating. ♥

Grab a copy of More Than Exes on Amazon | Barnes & Noble | Kobo.