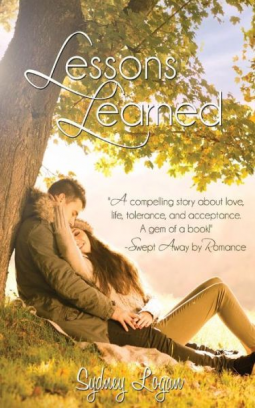 Lessons Learned by Sydney Logan was able to do something that a lot of books aren't able to--it surprised me. As I was reading it, I noticed that religion and faith were ongoing themes in the story, something I wasn't expecting since there really wasn't any mention of it in the synopsis. I started to get a bit wary since I'm the kind of person that doesn't like being preached to since whether you choose to believe or not or how you practice your faith is a personal choice and one that should be respected. Thankfully, my apprehension was for naught and this book proved to be inspirational!

Sarah Bray is an English teacher that returns to her hometown of Sycamore Falls after a life-changing experience while she was working in Memphis. She now lives in the home her late grandmother left her and even though she's been gone for nearly a decade, the people in her small town remember her and the family she came from fondly. As idyllic as her homecoming may seem, she's still dealing with the trauma of witnessing something she can never forget and she's about to re-discover that behind the smiles and pleasantries of some townspeople lie ignorance and bigotry.

Lucas Miller is a history teacher and a somewhat new transplant to Sycamore Falls from New York. He's adjusting to small-town living but the arrival of a former resident makes him sit up and take notice, bringing to life his hope that maybe the future is indeed brighter after the scandal that rocked him back in the city. Both he and Sarah have their secrets but he feels that this woman he grows closer to each and every day will be worth confessing his secret to and someone that's worth waiting for as she tries to cope with her own inner burdens.

Matt Stuart is one of the most popular people in his high school. He's the star quarterback of the football team, he does well academically, and he even works in the local grocery. But Matt has a secret of his own, one that he knows will cost him almost everything that he has now. When his secret is revealed by someone on his football team, the world as he once knew it turns on its head and now he simply wants to get through the rest of the school year a day at a time. All he has left is his mother, one true friend, and a teacher who believes in him, but are they enough to keep him going?

While the romance aspect of this book is an important one, especially since it enables Sarah to move forward with her life and it provides her with the knowledge that Lucas accepts her and her burdens, the angle of not just societal tolerance but acceptance as a whole is what gives the story its true heart. I liked how Matt's situation gave Sarah an opportunity to have her own journey of redemption and that Lucas was there for both her and Matt. And the religion aspect? I loved that it showed the good and not-so-good aspects and that not every member of a sect is closed-minded.

Lessons Learned is a book that makes you think and reflect. What would you do if you were in Sarah's situation? What would you do if you were Matt? The book doesn't try to portray any of the characters as perfect individuals and that's something I can fully appreciate. They're flawed and there are no easy fixes for any of the problems they face but the journey they're all on is a meaningful one, with the hope that it will open minds and hearts. This was such an enlightening read and it was so much more than what I had expected. It's a truly worthy read and one that merits 4.5 stars. ♥

Grab a copy of Lessons Learned on Amazon | Barnes & Noble.