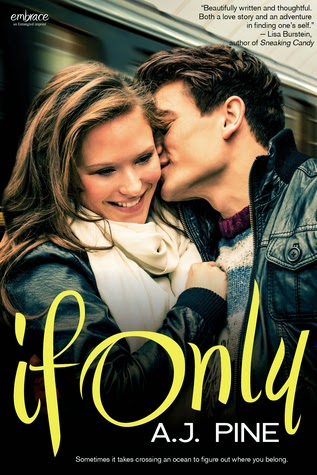 If Only was author A.J. Pine's debut novel and is part of the series with the same title. It falls under the new adult (NA) genre. I decided to read the book because the second book in the series is on my NetGalley read and review list this week. While a lot of series will say that each book can be read as a standalone, I prefer reading books in order, just to have that foundation that I feel benefits the whole reading experience. But hey, that's me.

Jordan Brooks is on her way to Aberdeen, Scotland for her junior year of college as an English literature major. It's been two years since she was in a committed relationship with the one and only guy she's ever slept with. Her best friend, Sam, advises her to enjoy her time in Aberdeen and to try looking for Mr. Right Now instead of Mr. Right. When Jordan meets fellow American and student Griffin Reed on the train, she thinks of taking Sam's advice to heart.


On the same train ride, Jordan Brooks meets Noah Keating and they hit it off immediately. After they share an unplanned kiss, one that is soon followed by a couple more, both feel something more than just a physical thrill. However, Noah receives a text message and the magical moment they shared is broken. Little does she realize that she'll be seeing more of Noah when she gets to Aberdeen since they have the same major and the story behind that one text.

I'll be upfront about this--I had a love-hate relationship with this book. There were moments that had me smiling, especially whenever Griffin was around, but there were also times that I wanted to smack Jordan or Noah or both at the same time. There was all this back and forth going on in Jordan's head and I couldn't help but feel that she was basically using Griffin as a scapegoat because of the fact that Noah had a girlfriend (and that's a whole 'nother messed up situation).

Watching Jordan and Noah try to maneuver their way through their weird circumstances tended to be frustrating, and no, this wasn't because these characters were half my age. There was a lack of communication, leading to assumptions being made. I get that Noah has trust issues but Jordan's fixation on her time in Aberdeen, thus her time with Noah, having an expiration date bugged me. It amazed me that the other characters were as supportive as they were of Jordan.

But, like I said, I did like some aspects of the book and by the time I finished reading it, I was satisfied with how everything ended, especially because it felt realistic rather than overly optimistic and fantastical. Having all the events occur over the span of an entire school year was a plus because it wasn't rushed or forced. I know the second book is about Griffin but I hope a novella focused on Elaina and Duncan and maybe something on Daniel will be on the horizon. All things considered, If Only gets three stars. ♥

Grab a copy of If Only on Amazon | Barnes & Noble | Kobo.