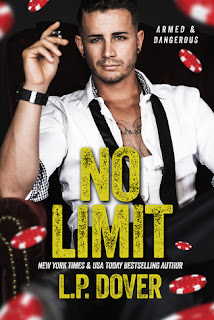 Jason Avery does his best work while undercover. He's used to doing things on his own, so when the latest case he's working on takes longer than usual for him to close, FBI Agent Aylee McFadden is brought in without his consent. He tries to do everything possible to make Aylee simply go away, but he's underestimated how determined she is to see this case through. It takes a bit of time and effort for them to trust one another, but once they do, they become a team that'll be difficult to bring down. With a list of suspects rolling in more money than you could dream possible and with enough power to possibly see them escape charges, Jason and Aylee are focused on garnering justice for the women who've been murdered. There's no limit to how far they're willing to go to bring the perpetrator down once and for all.

No Limit is the first novel in the romantic suspense series Armed & Dangerous by bestselling author L.P. Dover. This happens to be my very first L.P. Dover read and I must say that I was so taken in by the fast-paced story that had the right balance of romance, mystery, and suspense that I can guarantee this series won't be the last of hers that I'll be perusing. Several women who happen to be prostitutes have been found murdered in Las Vegas, and undercover cop Jason Avery is sent to see if he can figure out who's behind the killings as quickly as possible. Pretending to be a gambler should have given Jason an in but the case is proving to be more difficult than ever, leading the higher-ups to bring in Aylee McFadden, and FBI Agent who'll be working undercover as a prostitute Jason has by his side and fireworks ensue immediately.

I loved the chemistry between Jason and Aylee. Even if there was an attraction from the beginning, there was distrust between the two of them and it took a while for both of them to feel comfortable enough to share information with each other. Pretty soon, the protectiveness that Jason feels for Aylee is more personal than it is professional and as much as she wants to keep her distance from the guy she considers a playboy, she's drawn to him. But crossing the line works for them because it heightens their instincts to get the job down as soon as possible and without any harm coming to either of them. They've got suspects in mind, but finding proof of their guilt could lead to Aylee's life being put in danger. I actually had one suspect in mind, and while I was kinda right, there was a heck of a lot more going on than I first envisioned.

The mystery suspense aspect alone already had me impressed, but the love story between Jason and Aylee never had an ounce of sappiness to it, because it would have been seriously out of place in a tale like this. They're undercover agents and they always carry with them a certain kind of intensity and passion, two things that they also bring into their evolving relationship. There was never a dull moment in the story and having Jason and Aylee as the main characters simply made this all the more believable. The writing was fresh and creative and keeps the reader's attention on everything that's going on from start to finish. By the time I write this, I'll already have finished the second book--which I also very much enjoyed--and I can't help but recommend you all check out the Armed & Dangerous series. I'm giving No Limit 4.5 stars. ♥