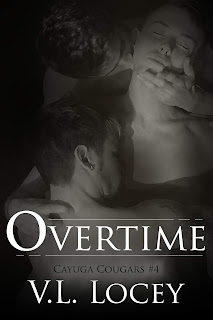 I just love how this series has slowly but surely crept its way into my heart with each new book that V.L. Locey has written and released. Book four is an M/M/M story, which I'm often wary about because it takes a whole lot to convince me that all three parties are equally committed to the relationship and equally dedicated to one another. So yes, I was worried that this latest book would end up being a step back in terms of the progress that the Cayuga Cougars series has made with me. Well, I'm happy to say that I needn't have worried all that much because as it turns out, the author knocked this one out of the park and Overtime came THIS close to knocking Improper Fraction out of the top spot it sits on in my list of Locey reads. Overtime may be read as a standalone, but like with its predecessors, I recommend you read the Cayuga Cougars series in order to have a better feel for the hockey team.

Sander March is still trying to find his footing within the Cayuga Cougars. He knows he isn't exactly the coach's favorite player, but then that's what happens when you're the man's husband's ex. He may come off as brash and someone who keeps everyone at arm's length, but Sander's past has him putting up walls that have become impenetrable even as he craves the love and acceptance of a significant other. When he meets minor league baseball player Mateo Castillo, they forge a friendship that he hasn't had much look doing within his own team. When Mat introduces Sander to his boyfriend, manga creator Noah Coombs, the threesome become even closer, to the point that the line between platonic and passionate is crossed. While Sander is initially unsure, Mat and Noah make it clear that they want the hockey player to be part of their relationship. However, not everyone is as accepting of what's going on. Should he walk away or stay? When Sander's past comes along, there may not be time to run.

This book was darker compared to the first three novels in the series, and a lot of that has to do with what Sander experienced when he was younger. I don't want to get into the details too much for fear of spoiling the book for anyone who has yet to read it. However, I will warn you that there may be certain triggers for some readers out there, particularly when it comes to various forms of abuse. There is also mention of rape, so if these subject matters are potential triggers or may be something you're not fully comfortable reading about, you've been forewarned. However, if you're a reader who doesn't have these topics on your no-go list, I hope you'll read the book because it really is one that's worth the read. I've read quite a few of V.L. Locey's books--both those she's written on her own and those she's co-written--and I'd consider Overtime among her top two. While M/M/M isn't for everyone, the manner in which the relationship between Sander, Mat, and Noah develops isn't something that's merely glossed over. There's as much heart as there is heat in this book, which is why Overtime receives five stars. ♥