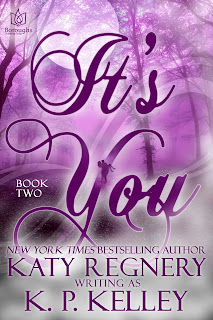 Bestselling author Katy Regnery, writing as K.P. Kelley, concludes her first foray into paranormal romance with the second book in her It's You duet. With the cliffhanger from the first book, readers were left wondering if there was still an viable way for main characters Jack Beauloup and Darcy Turner to have the happy ending they've been wishing for. After all, how does a Roug--a wolf shifter--and a human bond and how are they able to not just sustain but defend that bond to a pack that has never encountered such a bonding in all of its existence? The knowledge that the only man she's ever loved isn't human has Darcy wanting to keep as much distance from him as possible, but she also can't deny that she wishes her were next to her. She's confused about what her heart wants and what her mind is unable to accept. With Jack losing hope as to Darcy's commitment to their binding, he will still stop at nothing to protect her from those who seek to do her harm, especially with that imminent danger coming in the form of his half-sister. But once they overcome that, will they be truly able to walk away from each other and never see each other again, or will love force them to make a decision that could change the course of their lives--and their love--in ways that they may never, ever recover form? They belong together, but will they remain together?

If the first book was more about the romance than the paranormal element, this second book had a finely tuned balance between the two. Jack and Darcy are up against themselves and everything either one of them has ever known. There are things that the pack and humankind automatically reject simply because it's something that is unfathomable, and at the top of that list is the mating of a Roug and a human. The first part of this book had a lot of back and forth, especially on Darcy's end, because she was having difficulty coming to terms with what Jack truly was and her undeniable love for him. There's also still a lot of secrecy on Jack's end, mainly because of his fear that there really is no other alternative other than the one presented to him by others in his pack--to turn Darcy. This had a lot of surprises, and the pacing felt quicker than its predecessor. It's clear that Jack and Darcy aren't merely together simply because of their bond but because it felt like fate. Aside from their story, I also had my eye on the love story between Darcy's younger brother Amory and her best friend Willow Broussard, which may not have been the main focus of this duology, but it was one that captured my attention from the beginning. All in all, It's You ended with my expectations surpassed, proving Katy Regnery can indeed write paranormal romance. 4.5 stars. ♥

Read my reviews for the It's You series: