Review: Dead in the Water by Britney King (Water #2) 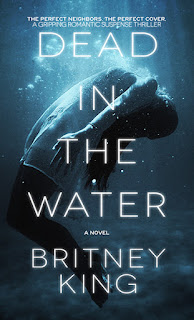 You and me, we share the same agenda. Different motives, often--but the same goal, nonetheless. We want to make the world a better place, and like most people, we want it our way. The trouble is, not everyone gets to have it their way.

If I thought Water Under the Bridge knocked me off my proverbial feet, well its sequel and the second in the Water trilogy, brought me back up so I could give it a much-deserved standing ovation. Britney King's storytelling is unlike any other author's I've come across in the past few years and she's given readers an antihero AND an anti-heroine that one can't help but be a tad obsessed with, the "one" being me, of course. Now, neither Jude nor Kate are the first antiheroes that I've liked, but they are the first that happen to be a couple. Yes, I know all too well that they are serial killers--a fact that carries over from the series starter--and yes, I know that they aren't exactly mourning the deaths of their victims nor are they making excuses for their bad behavior and calling it that is putting it mildly.

Jude and Kate fell in love, got married, created a family, and lived happily ever after. Well, not quite. Life in suburbia for two serial killers isn't as easy as you would think. If anyone even had an inkling of what they were doing during their downtime, these two probably wouldn't be invited to the next neighborhood barbecue or street party. But Jude and Kate are who they are, and they do have their reasons for doing what they need to do. Skilled as they are with their kills, these two also happen to be highly competitive, and keeping a tally of how many either one of them has offed may be a form of foreplay. However, when things go awry, it adds a kink to their marriage, and not in a good way. Will their friendly competition lead to happiness at home or just an escalating body count?

We get Jude and Kate as husband and wife and as parents, but we also learn more about their back stories courtesy of several flashbacks that allow readers to peek into their respective pasts, giving us a better understanding of how they've evolved into the people--and killers--they are today. Jude and Kate's relationship has always had these layers upon layers of complexities piled upon it and they obviously have issues--both new and old--and while they may both be killers, they're also very different people. There are moments of anger and frustration but there are also the ones that show that for all their kills, Jude and Kate are still quite human, thank you very much. Dead in the Water is anything but and I can't wait to see where book three takes us. Five-plus stars. ♥

Read my reviews for the Water series:

Water Under the Bridge (book one) - five-plus stars - My Review

Purchase Dead in the Water on Amazon | iBooks | Kobo.