Review: Water Under the Bridge by Britney King (Water #1) 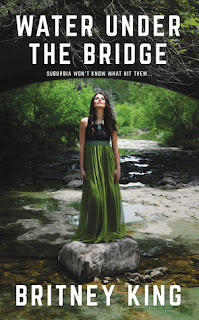 I wish I could forget the feeling of a kill. The euphoria. The thrill. But I can't. It's a part of me. Sometimes it seems that it's all of me and that the further away I get from my last kill, the more of me the murderer within consumes.

Wow. I love it when a book knocks me out of my comfort zone and leads me on a twisty tale told in a way I can't, at this very moment, recall I've come across before (and I've read a hell of a lot of books). Water Under the Bridge is a psychological thriller with elements of romance, though a very eerie kind of romance, and it's the brainchild of author Britney King. This is the first in a still unnamed series, well, as far as I know there still isn't a title based on my poking around Goodreads and e-retailers, but don't fret, bookaholics. This doesn't end in a cliffhanger even if the two other novels--at least based on what was mentioned by Britney King at the end of book one--still have the same set of main characters. Considering the author blew me away with how she chose to give voice to Jude and Kate's story, I'm already looking forward to finding out what she has in store for readers with books two and three.

Jude and Kate are a fictional first for me. Kate is a serial killer...but then so is Jude. Serial killers have their similarities but they also have their differences, as is the case for Jude and Kate. They kill for different reasons and their methods vary, yet they're tied together by the need to do what they do. There's a purpose behind their actions, something that motivates them. When these two find one another, there's this unique feeling of creepiness and kismet, as if they were always meant to be together. And that's the thing: they fit in a way that would be impossible had one ended up with someone else. These two were tethered from the beginning, and they did bring out each other's best and worst. Apart, they were unstoppable; together, they became invincible...and I couldn't help but root for them. Weird? Yes. Worth reading? Hell, yes. Five-plus stars go to Water Under the Bridge. ♥


Purchase Water Under the Bridge on Amazon | B&N | Kobo.