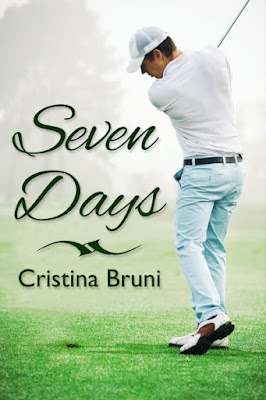 About Seven Days
During a golf tournament in Virginia, American golfer Reggie Weston meets Russell Lee, the British former world champion in the sport. The two men hit it off when Russell takes Reggie under his wing, teaching him the tricks of the game.

As their friendship deepens, Reggie finds himself falling in love with the Englishman, though he knows Russell doesn’t feel the same. He’s painfully aware of the fact that Russell isn’t gay.

But there’s more to Russell than meets the eye. He’s a troubled soul, plagued by monsters in his head telling him who he should be. He’s spent most of his life hiding his sexuality from the world so he won’t disappoint his homophobic mother.

Is seven days enough time for Russell to break through the years of hurt and accept the new direction fate has in store for him and Reggie?

An Excerpt from Seven Days
The Englishman beat him at pool, winning both matches. Reggie wasn’t upset, though, as every moment of their evening together was delicious. Everything apart from the beers Russell drank one after another, until he got so drunk, Reggie decided it was time to return to the resort.

“Tomorrow you have a tournament to win,” Reggie reminded him, pulling him out of the bar with difficulty. The silvery rays of the smiling moon lit the boardwalk, giving it a magical atmosphere.

“I won’t win any tournament tomorrow,” the Englishman murmured, gritting his teeth as he stopped in the middle of the road.

Reggie pushed him across the same moment a car zoomed by, blaring music.

“If you don’t rest a little, you won’t win anything,” he admonished, like a brother. Then he nervously massaged his cheek. He wasn’t accustomed to feeling it covered with hair.

The Englishman chuckled. “I already told you I won’t answer until tomorrow.”

A second later Reggie found himself holding car keys. “And these?” he asked, giving them an interrogative look.

“You drive, if you want us both to play tomorrow,” the Englishman said.

“Oh…okay,” Reggie stuttered, as if it was the first time he saw a car key in his life.

Russell fell into the passenger side seat and completely opened the window, putting his elbow out, then resting his head on it. He remained in that position until they reached the resort.

From time to time, the notes of the Nickelback rock song “How You Remind Me” cradling them both, Reggie gave him admiring looks. His long hair, now free, danced in the wind. The way he sat made the veins in his neck tense like cords, and Reggie stared at his strong profile, his long, light eyelashes…

God, what he would do to lay his lips on that face and give it little kisses?

They stopped at a traffic light just before reaching the resort. Reggie kept his eyes fixed on the red light, because they had already strayed too much to Russell’s face.

“What was your parents’ reaction when you told them?”

Reggie turned, surprised. Russell had spoken without moving a muscle, apart from his lips.

“Not much,” Reggie explained with a chuckle. “My father pretended to be upset for less than ten minutes and then he hugged me. Mom told me she was a little sorry because she wouldn’t have any grandchild to take care of, but she could accept it if I didn’t bring home too many buff guys.” It was clear that binge drinking was making Russell ask strange questions…

Sitting back, Russell started, “When Daniel, the friend I told you about, came out…”

They entered the tree-lined resort path and Reggie hung on every word, waiting for Russell to finish his sentence.

“…my mother ordered me not to go out with him anymore. She told me she thanked God I wasn’t like him, or I could never return home.”

Reggie stopped the car in surprise. “Shit, Russell,” popped out of his mouth.

The Englishman gave him an inscrutable look.

“I mean,” Reggie continued, lightning his tone, “I don’t want to seem rude, but it’s just that…well, it seems your mother is a little, well…”

He’d have liked to add a thousand other things and ask more, but he felt scared. Russell had just given up a part of himself, a little window into his past that maybe not everybody knew, and Reggie felt intimidated. He wanted to know more, but at the same time, he feared reopening old wounds that needed to heal.

They parked behind the cabana and Reggie helped Russell get out of the car.

Russell tried walking on his own but stumbled on the sidewalk as soon as he stepped onto it.

“Okay, maybe it’s better if you help me, Weston.” Supporting Russell, Reggie slid an arm around his side.

His body was warm against Reggie’s, and he hugged Russell in a sort of leaning embrace. It was a delicious sensation, and for a moment, Reggie dreamed of what it would feel like to Russell him again and again, maybe on a frigid winter afternoon in front of a fireplace, or on a hot summer night on the beach.

They passed in front of the tiki bar without caring what others might think. From the speakers around the pool blared Eminem’s hit song, “The Monster.”

At the door to Russell’s cabana, he searched his pockets to find his keycard. When he tried to insert it, he missed. He tried again, but he was too drunk. Finally he gave up and handed the keycard to Reggie without looking over. Reggie followed the silent order, like a good little soldier.

The cabana greeted them with silent darkness, lit only by the rays of the setting sun that shown through the open door.

Again, there was no trace of Danielle, not even her perfume lingering in the air.

Russell threw himself on the bed and toed off his shoes. “Do you hear this music, Reggie?” he whispered, rolling onto his back.

Reggie had remained by the door, not sure what to do. Go or stay? His mind suggested he leave, but his heart wanted to stay.

“Yeah, it’s Eminem,” he answered, putting his hands in his pockets.

“Open the window a little, please. I want to hear the words.” Reggie obeyed, closing the door and opening the window.

A light breeze roused him, adding melancholy to melancholy.

At the window, Reggie studied the bar and swimming pool, because looking at Russell, drunk and lying in bed, was unbearable.

About Cristina Bruni
Cristina Bruni lives in northern Italy with her husband and their child. She’s already published many M/M novels in Italy with Triskell Rainbow publisher. Since she was a young girl, her biggest wishes were being a mother and an author and now, after fighting for it for years, she finally succeeded in both. She loves travelling abroad, going to the cinema, reading Sherlock Holmes, luxury bags and playing tennis and golf. She’s madly USA-sick and UK-sick.

She made her debut writing fanfictions and, now, her new wish would be writing love Male-to-Male stories for the rest of her life and living on a beach in Hawaii.