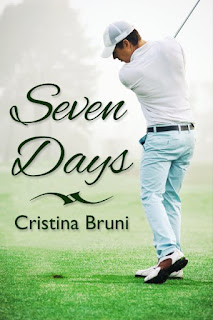 Seven Days is an M/M sports romance written by Cristina Bruni, with golf being the sport that main characters Reginald Weston and Russell Lee engage in as they build a fast friendship that quickly becomes more in a matter of days. At twenty-two, American Reggie Weston is basking in the thrill of being a rookie on the PGA tour. He's both excited and nervous at the prospect of being among players on both the US and European tours that he's looked up to, but when he meets Russell Lee in a bar, he can't quite believe his luck. The Brit used to be the top golfer in the world and has his share of championships under his belt, and he's the one player whom Reggie idolizes most.

As Russell takes Reggie under his wing, the rookie knows he needs to keep his attraction to the veteran player under control. After all, Russell is very much straight with a longtime girlfriend to boot. But behind that cool and calm persona, the thirty-one-year-old Russell battles monsters that have lingered within him for far too long. He's hidden who he really is, dealing with too many regrets and much guilt. Reggie could be the one person who can convince Russell that the monsters can be vanquished. But are seven days enough to to win a war that's already taken too much from Russell and will Reggie still be standing at the end of it or will he become the latest casualty?

Golf is a sport that I actually enjoy watching, much to the bewilderment of family and friends. It's about more than just whacking a ball with a club. I liked how the author made the story a focal point and not merely a backdrop for Reggie and Russ. The tale of a younger man falling for an older man who also happened to be his favorite player only to find out that the latter was very deeply hidden in the closet was well told. Reggie, though, reminded me of an overly eager puppy and I do think he fell too hard and too fast. He always seemed to be the one who had to make the effort in their kinda-sorta relationship, so I question how long they'll really last. 3.5 stars for Seven Days. ♥