Review: Daughters of the Bride by Susan Mallery 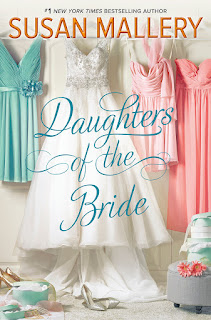 
Prepare to be shocked. Daughters of the Bride is my first ever Susan Mallery read, and nope, I'm not kidding. Her Fool's Gold series has been on my to-be-read list since late last year, but I confess that the sheer number of books I need to read in that series alone is a tad daunting and has me stalling because I do like reading a series in order. So, when I found out that she was releasing a standalone, I jumped on it and based on this novel alone, I can see why the author has the loyal following that she does. She's crafted a beautiful and touching story about a mother who, after the loss of her husband, is now given the chance to start a new life with someone she loves and her three daughters who learn more about their mother, each other, and themselves and discover that love, when truly given a chance, could change their lives forever.

Maggie Watson is about to get married for the second time, having been widowed nearly a quarter of a century ago. She's finally able to put together the wedding of her dreams, and naturally, her three daughters, Rachel, Sienna, and Courtney, are there to help. Her relationship with each of her daughters is different. Cracks can be seen and her parenting is flawed--but I think anyone would be hard-pressed to name a parent who hasn't made mistakes. This novel also highlights a fact that I've always reiterated: that we don't always know every single thing about the very people we think we know inside and out. We form opinions based on what's shown to us and what we perceive as true. More often than not, they can surprise the heck out of us when we learn their hidden truths. Weddings can bring out the best and worst in people.

I come from a family of one older brother, one older sister, and two younger sisters and I've been part of a number of family--both immediate and extended--weddings. It's a stressful time, but it's times like those where you glimpse a side of the bride, groom, or someone else in the wedding party that you never realize existed. Rachel, Sienna, and Courtney are forced to face certain facts about themselves that they need to reconcile with what exactly it is they want out of their lives. Everyone wants to find that happily-ever-after but that comes in different packages and forms for different people, and sometimes, it requires us to let go of certain things in order to be able to take hold of and hold on to what matters most. Daughters of the Bride may be my very first Susan Mallery novel but it certainly won't be the last. This book gets five stars. ♥

Purchase Daughters of the Bride on Amazon | B&N | Kobo.