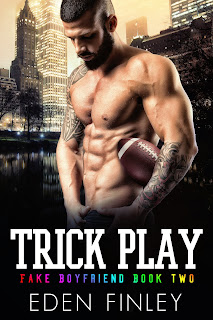 The smile Matt gives me makes breaking down my walls and putting my heart on the line worth it.He touches his forehead to mine. “I'm in love with you too, idiot.”

“You speak to me with such affection.”

“You started it,” Matt mumbles.


The cynical part of me wondered if the Fake Boyfriend series starter was a fluke; that maybe only the first book was as good as it was and that my expectations for the second one were overly lofty. So, with a mix of anticipation and trepidation, I jumped into Trick Play with fingers and toes crossed. And well, what do you know? It's two for two for Eden Finley's M/M sports romance series and gah! I'm officially obsessed with this particular cast of characters, especially since there seems to be a new crop of supporting characters that I find myself hoping will get stories of their own as the series moves forward. But more about those potential plot bunnies later because this second book about a simple fake relationship that turns very real and very complicated is all about twenty-three-year-old tight end Matt Jackson and twenty-six-year-old political scion Noah Huntington, both first introduced in Fake Out.

When Matt Jackson was outed during a very public makeout session, the aftermath may not have been surprising, but he still finds himself reeling. After all, not be re-signed by your team even if you happen to have the best stats in the league makes it pretty obvious what the real reason was. When his new agent suggests Matt enter into a fake relationship in order to help bolster his image--from the guy hooking up with some anonymous guy in a club to a gifted pro athlete committed to another man--he isn't entirely sure how it will help him get a contract with another team. He's never even been in an actual relationship with another guy, so how is he going to be pretend to be some loving boyfriend? You'd think that the fact that he's drawn to Noah Huntington--his fake boyfriend--would make pretending to be in love easier, but when it all turns real, the differences between them could spell the end.

Consider me absolutely smitten with this series! Eden Finley had me all giddy even after I was done reading Matt and Noah's story. Seriously, these two had the kind of tension that gets me all excited, especially given that there was a slew of obstacles and issues they had to overcome, including the stuff going on inside their heads. This wasn't a case of me immediately liking either of the main characters. Nope, I had to work up to it, just like Noah with Matt and Matt with Noah, and I quite liked that we went that route! And gah! The supporting characters! It was fun to have Maddox O'Shay and Damon King popping in now and again, but I adored the new guys who were introduced here, particularly Matt's new teammates, Marcus Talon and Shane Miller, plus his younger brother Jethro, aka JJ or Jet. I really need their stories ASAP, Eden Finley! Totally begging here. Five-plus stars for Trick Play. ♥

Read my reviews for the Fake Boyfriend series:

Fake Out (book one) - five-plus stars - My Review