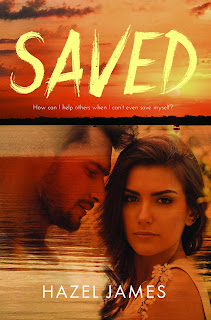 I liked Chased, but I loved Saved. Hazel James's Battles series has just released its second offering, and it had  nearly every bit of awesomeness that I could have wished for. If you've read the first book, then thirty-four-year-old Clay Prescott should be more than familiar to you. He gets his own time in the proverbial spotlight with his love story with twenty-seven-year-old Leilani Moretti. Clay knows what it's like to hit rock bottom. He may have experienced war while in the military, but his PTSD let him to battle through his alcoholism and come out on the other side wanting to do better. He started Battles in hopes that it'll provide help to those who need it most. When he's asked by his best friend to help welcome the newest resident of Operation: OklaHOMEa, Clay is taken by the feisty Leilani. She may be a forn amputee who's now in remission after breast cancer let to a double mastectomy, but she refuses to feel like a damsel in distress needing to be rescued. The fact that Clay has a habit of swooping in to save others should make her want to stay away...except...Leilani doesn't want to.

While we do get cameos from some of the characters in the first book, this second Battles novel can really be read as a standalone because it was wholly Clay and Leilani's story. I loved the back and forth between the two of them. They were both independent people who came from loving and supportive families, but they also had their own issues to deal with. While Clay may seem like the perfect guy on the outside, there are definite moments in the book where we see a side of him that makes it clear that the man who's on many people's pedestals actually has his own set of flaws. I liked that the author's writing her seemed more on-point, with better focus and a far more realistic flow to the story. Just like its predecessor, there were quite a few notable side characters here, and there was twist that was more subtle than I would have expected, and that's not necessarily a bad thing since I love it when an author can keep me on my toes. Overall, Saved was a romance that held my attention as long as it held my heart--and that was from start to finish. This one receives five stars. ♥

Read my reviews for the Battles series: