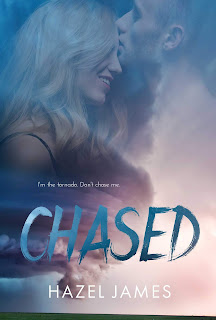 Hazel James is a new-to-me author and while her Battles series starter wasn't perfect (but then no single book can really be deemed "perfect", right?), I was left rather impressed with the story she told and the cast of characters that she introduced her readers to. Chased is the story of twenty-four-year-old former pararescuer turned mechanic and amateur storm chaser Andrew Lucas Rhoads--better known as DH--and twenty-two-year-old emergency room nurse Paige Moore. When Paige decided to move to Oklahoma to begin her nursing career, she was aware of the risks involved when it come tornadoes. After all, her love for all things The Wizard of Oz opened her eyes to just how powerful this particular natural event can be. Instead of meeting a set of wondrous creatures, she crosses paths with DH, who is rather wonderful albeit a tad overly flirty. There's no way she can get involved with the guy, no matter how attracted she may be. She's got a long-term boyfriend back in her hometown, and on paper, he's the perfect man for her. So, what is it about DH that makes her want to throw caution to the wind? But then falling for Paige is one risk DH may not be willing to take, not when he's already lost someone close to him. Losing Paige is the one risk that DH isn't--and probably will never be--prepared for.

I liked a great deal about this book! From the unique love story that played out between DH and Paige to the cast of characters that I grew attached to while reading this book, Chased proved to be a really nice surprise. The back stories that both DH and Paige brought made them interesting characters to begin with, but they were also likable people who I wanted to get to know even more about while reading their love story. There's an overall lightheartedness that the book has, but there are also some heavy moments, majority of which were courtesy of DH and his own feelings of guilt over what happened while he was serving alongside his best friend. Surprisingly, there was even a bit of action and suspense thrown into the mix, although if I'm being totally honest here, it came out of nowhere, and well, you know what they say about too much of a good thing? Yeah, that's what happened here. The story was well and good for about ninety percent of the book and then one thing after another happened, almost as if every bit of hurdle that fate could throw DH and Paige's way was done so for the book's climax. Ultimately, it did cost the book half a star, leaving Chased with "just" four stars. ♥