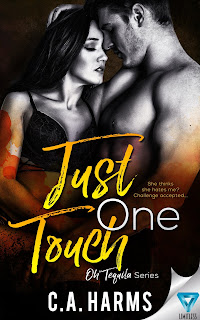 C.A. Harms is back with the latest novel in her Oh Tequila series, which is my favorite series from the author so far. Just One Touch is the story of college student Clayton Powell who falls victim to a major prank that lands him in the hospital. One look at Clay and nurse Emelie tags him as nothing more than a frat boy who doesn't do much of anything other than party and be irresponsible. She isn't exactly a fan of guys who fall under that category, not when she found herself pregnant as a teenager. Her world revolves around her two-year-old son Ethan and her nursing career. Emelie doesn't have much time for much else, especially not a guy like Clay. Only... There's far more to Clay than meets the eye. Maybe she had him pegged wrong. Maybe he isn't just a guy who's all about his fraternity and bagging the next girl to occupy his bed. Even if Clay can convince Emelie that he isn't such a bad guy after all, it's going to take a whole lot more for her to see that maybe, just maybe, he's a keeper--someone she can entrust not only her heart but that of her son. It may take more than a touch.

I've read a few of Harms's novels and series in the past, but there's just something extra special about her Oh Tequila stories. It could be that fine balance between the lightheartedness and the hint of angst that she manages in every single book in the collection that I've read so far. In the case of Clay and Emelie's story, there's no denying that the Clay and his frat brothers know how to have fun and have gotten themselves in more than their fair share of trouble--a lot of which was inflicted on each other. However, there's something more to each guy that I've encountered so far, and Clay certainly carries that on here. I liked how this book wasn't just about Clay and Emelie finding a way to their own happily-ever-after but also figuring out if their actually able to be one cohesive unit with Ethan in the mix. In as much as Emelie brings out a more mature and responsible side to Clay, he's also the one who opens her eyes to the possibilities of having a life beyond the limitations that she's set for herself. That's three for three for this series! I'm giving Just One Touch five stars. ♥

Purchase Just One Touch on Amazon.