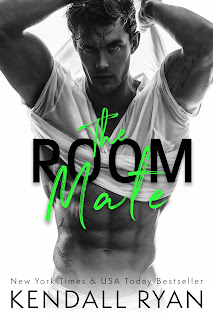 I do believe I've found myself a new book boyfriend to drool, erm, swoon over in Cannon Roth, male main character in bestselling author Kendall Ryan's Roommates series starter, The Room Mate. This had a familiar romance trope--falling-for-your-best-friend's-sibling--and yet I didn't find it boring or tiresome in any way. This has both heart and heat as well as lighthearted humor along with a bit of heart-tugging angst and it's headlined by a couple of main characters that I was totally smitten with from the moment Paige got a pretty good idea of just how much her best friend's younger brother Cannon had grown up from the nerdy boy who followed them around like a puppy when they were kids. Bonus points for Paige being older and for the four-legged, furball named Enchilada.

When twenty-eight-year-old Paige took the call from her best friend asking if her younger brother could use the spare bedroom in Paige's place, Paige was hesitant. She liked her privacy and space, plus she hadn't seen Cannon Roth in years. When her twenty-four-year-old best friend's brother shows up, he's no longer the geeky kid from their youth. Nope, Cannon is every bit the kind of guy any girl would feel unworthy to drool over, and now they're roommates. When he tells her why he needs a place to stay, Paige can't help but scoff. He can't seriously think that every woman he's been with falls in love with him because he's some sort of god in the bedroom. Love wouldn't enter the picture if it were her. Can Paige back up her lofty claim or will she fall victim to Dr. Cannon-freaking-Roth?

I lost count of how many times this book made my smile. Out of all of the Kendall Ryan books I've read, this is my current favorite. I'm a sucker for stories that involve the guy having a crush on the girl when they were younger and for him to now be the guy every girl wishes were hers exclusively. There's a bit of pussyfooting and hemming and hawing, but it's all foreplay--sometimes funny, but more often than not hot. These two have got the whole sweet and steamy mix going and it's perfectly balanced, so you don't feel as if it's overly sappy that it becomes cheesy or if you've ventured into bad literary porn. Fortunately, Kendall Ryan has never been guilty of either one. With The Room Mate being as good as it is, the bar's been set high for the rest of the Roommates series. Five stars. ♥